This article is linked,even it may not look obvious, to the previous one, Talent vs Luck: the role of randomness in success and failure. 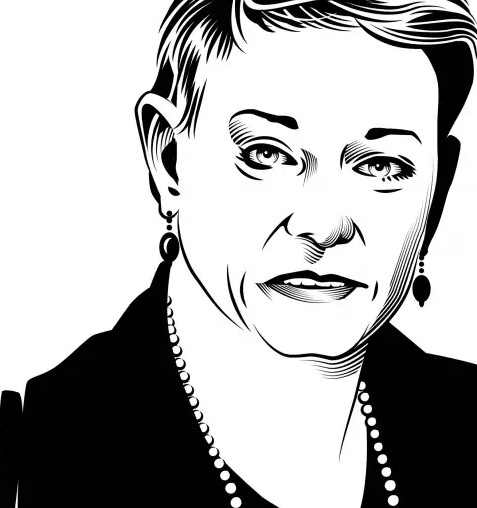 By Yann Legendre for Le Monde

I recently discovered in newspaper Le Monde the economist Deirdre McCoskey. I am apparently not the only French person to have ignored her: “The last in a series of 18 books (while waiting for a 19th that she is about to publish, and a 20th that she is in the process of completing), many of which have marked economic science and have been translated into a dozen languages … but not into French. Markus Haller, eponymous boss of the Geneva publishing house, translated one, The Secret Sins of Economic Science (2017 – the original was published in 2002!): “French publishers are flocking to French economists who have become stars in the United States but superbly ignore the American economists who generate the most debate.” I will definitely have to make the effort to read her. The article Deirdre McCloskey, économiste libertarienne d’un autre genre is available for a fee on Le Monde, here are two extracts … 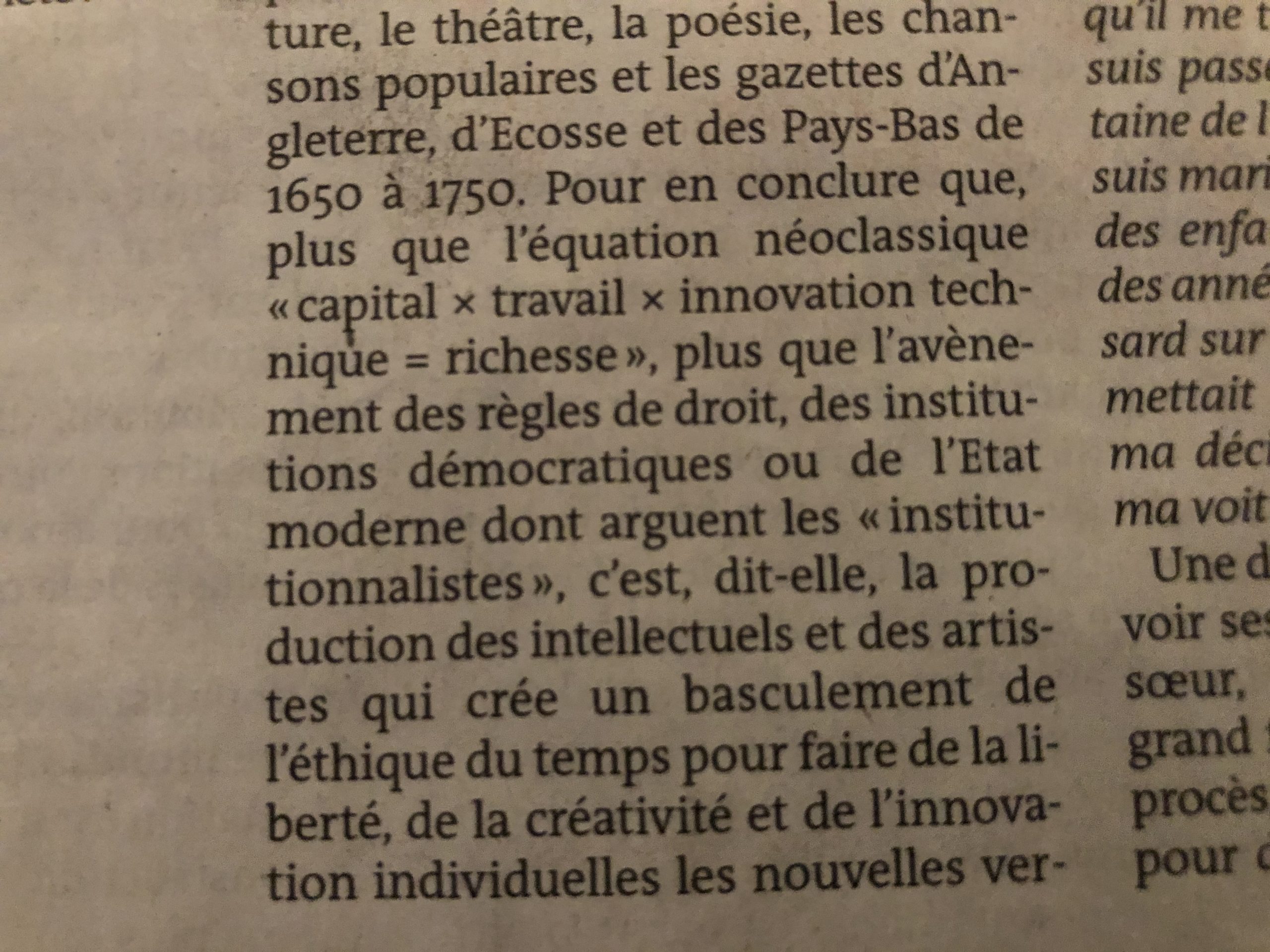 More than the neoclassical equation “capital x labor x technological innovation = wealth”, more than the advent of the rule of law, of democratic institutions or the modern state which the “institutionalists” defend, it is, she says, the production of intellectuals and artists who create a shift in the ethics of time to make freedom, creativity and individual innovation the new moral virtues in place of honor, rank and submission to the Church and to the prince. 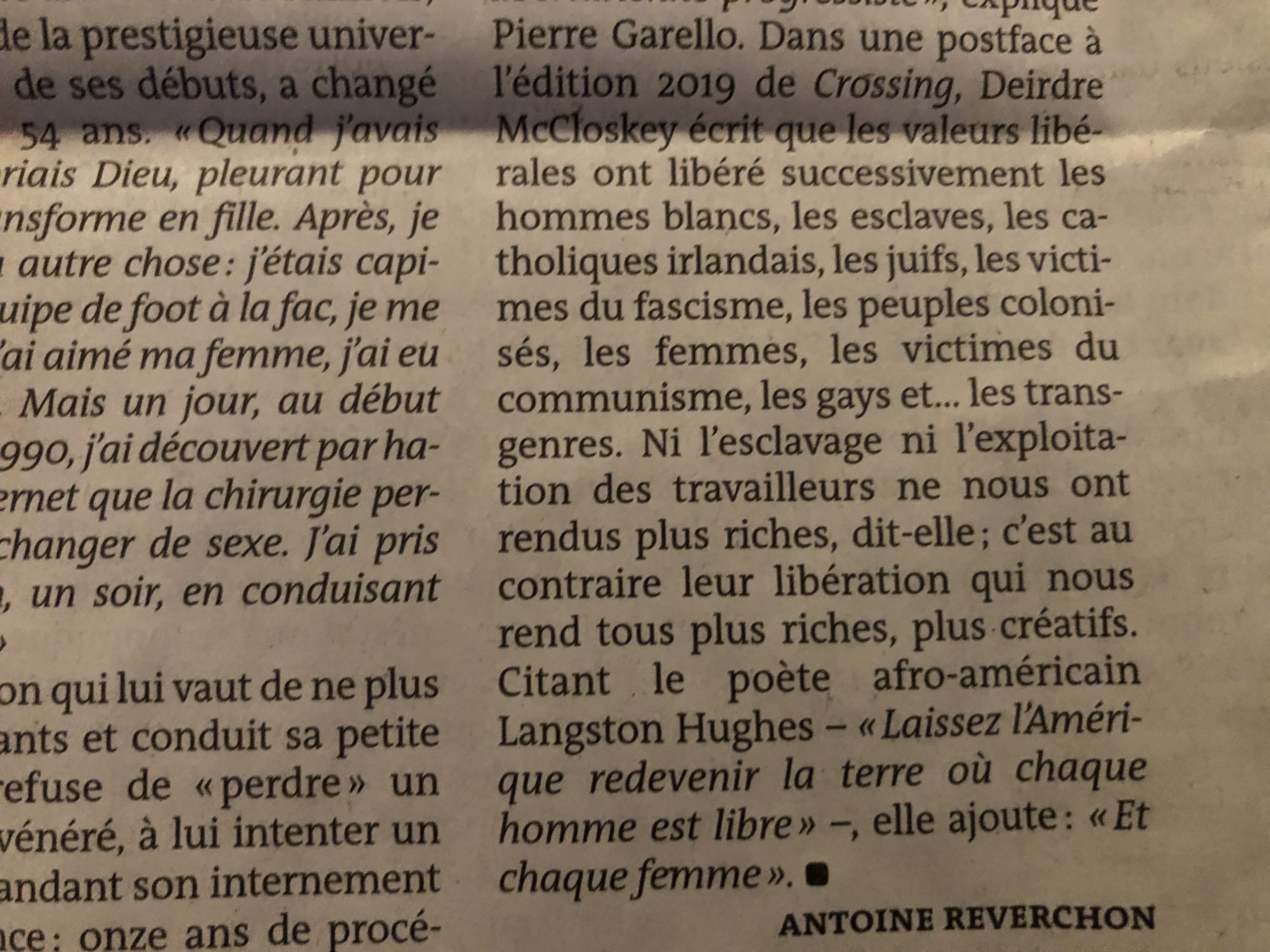 Liberal values freed successively white men, slaves, Irish Catholics, Jews, victims of fascism, colonized people, women, victims of communism, gays and … transgender people. Neither slavery nor the exploitation of workers has made us wealthier, she says; on the contrary, it is their liberation that makes us all richer, more creative. Quoting the African American poet Langston Hughes – “Let America return to the land where every man is free” – and she adds, “And every woman”.