Thanks to Laurent for mentioning to me Pasteurs Quadrant: Basic Science and Technological Innovation by Donald Stokes. There is more on Wikipedia. 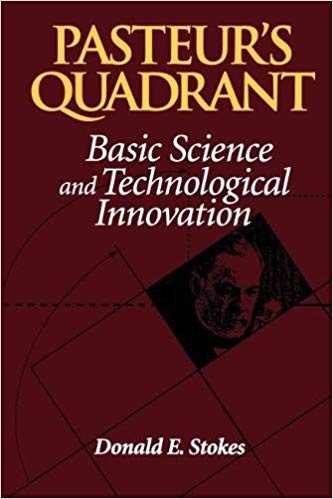 I have agreed with this for so many years and for the same reasons I never really understood the concept of R&D, I mean why the concepts of research and development would be associated in the same unit, but that is a slightly different topic!

Here is a long extract from Stokes (taken from a pdf found here) worth reading I think:

The examples from the history of science that contradict the static form of the postwar paradigm call into question the dynamic form as well. If applied goals can directly influence fundamental research, basic science can no longer be seen only as a remote, curiosity-powered generator of scientific discoveries that are then converted into new products and processes by applied research and development in the subsequent stages of technology transfer. This observation, however, only sets the stage for a more realistic account of the relationship between basic science and technological innovation.

Three questions of increasing importance arise about the dynamic form of the postwar paradigm. The least important is whether the neatly linear model gives too simple an account of the flows from science to technology. An irony of Bush’s legacy is that this one-dimensional graphic image is one he himself almost certainly never entertained. An engineer with unparalleled experience in the applications of science, he was keenly aware of the complex and multiple pathways that lead from scientific discoveries to technological advances-and of the widely varied lags associated with these paths. The technological breakthroughs he helped foster during the war typically depended on knowledge from several, disparate branches of science. Nothing in Bush’s report suggests that he endorsed the linear model as his own.

The spokesmen of the scientific community who lent themselves to this oversimplification in the early postwar years may have felt that this was a small price to pay for being able to communicate these ideas to a policy community and broader public for whom science was always a remote and recondite world of affairs. This calculation may well have guided the draftsmen of the second annual report of the National Science Foundation as they stated the linear model in the simplistic language quoted earlier in this chapter. In any case, these spokesmen did their work well enough that the idea of an arrow running from basic to applied research and on to development and production or operations is still often thought to summarize the relationship of basic science to new technology. But it so evidently oversimplifies and distorts the underlying realities that it began to draw fire almost as soon as it was widely accepted.

Indeed, the linear model has been such an easy target that it has tended to draw fire away from two other, less simplistic misconceptions imbedded in the dynamic form of the postwar model. One of these was the assumption that most or all technological innovation is ultimately rooted in science. If Bush did not subscribe to a linear image of the relationship between science and technology, he did assert that scientific discoveries are the source of technological progress, however multiple and unevenly paced the pathways between the two may be. In his words,

new products and new processes do not appear full-grown. They are founded on new principles and new conceptions, which in turn are painstakingly developed by research in the purest realms of science.

Even if we allow for considerable time lags in the influence of “imbedded science” on technology, this view greatly overstates the role that science has played in technological change in any age. In every preceding century the idea that technology is science based would have been false. For most of human history, the practical arts have been perfected by “‘improvers’ of technology,” in Robert P. Multhauf’s phrase, who knew no science and would not have been much helped by it if they had.

But the deepest flaw in the dynamic form of the postwar paradigm is the premise that such flows as there may be between science and technology are uniformly one way, from scientific discovery to technological innovation; that is, that science is exogenous to technology, however multiple and indirect the connecting pathways may be. The annals of science suggest that this premise has always been false to the history of science and technology. There was indeed a notable reverse flow, from technology to science, from the time of Bacon to the second industrial revolution, with scientists modeling successful technology but doing little to improve it. Multhauf notes that the eighteenth-century physicists were “more often found endeavoring to explain the workings of some existing machine than suggesting improvements in it.”