I’ve written about Grothendieck here before, through two books about this mathematical genius published shortly after his death: Alexandre Grothendieck, 1928 – 2014. Summer is an opportunity for listening to radio broadcasts and I had the pleasure to rediscover this extraordinary character, first of all through Alexandre Grothendieck : un mathématicien qui prit la tangente initially broadcasted in La conversation scientifique in 2016 on French radio, France Culture, 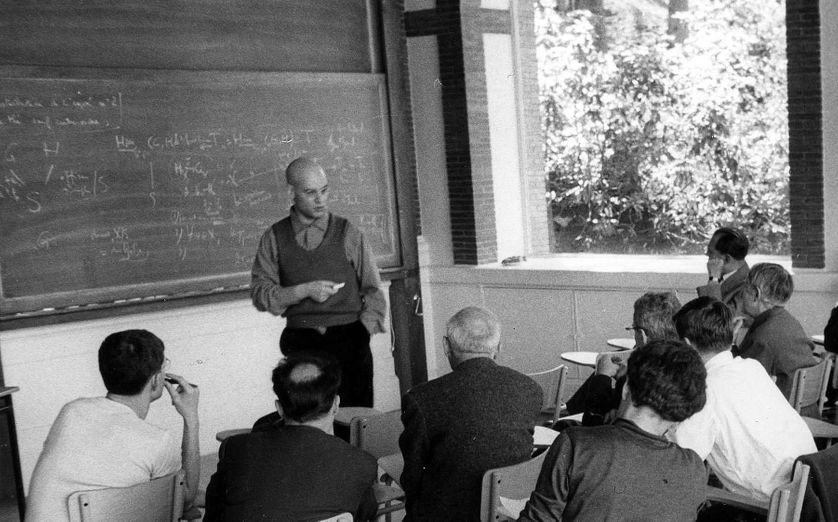 and then by listening (while writing this post) to Alexandre Grothendieck ou le silence du génie first broadcasted in 2015 in Une vie, une œuvre, on the same radio. 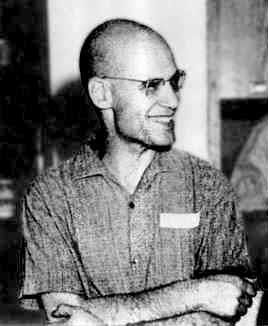 From one thing to another, I downloaded Récoltes et semailles, a 929-page document written between 1983 and 1986 by the mathematician. You can download the pdf in French. Just as Perelman, Gödel or Erdős, for us, simple mortals, we can believe that genius rubs shoulders with madness and the journey, the life of these creators will undoubtedly remain mysteries forever.

I read a few dozen pages of this book and Chapter 2.20 fascinated me. I suggest you read it. I find this extract quite admirable and translated it with my limited means…

2.20 A shot look at the neighbors across the street

[68] This is a bit short, of course, as a description of Einstein’s idea. At the technical level, it was necessary to highlight what structure to put on the new space-time (it was already “in the air”, with Maxwell’s theory and Lorenz’s ideas). The essential step here was not of a technical nature, but rather “philosophical”: to realize that the notion of simultaneity for distant events had no experimental reality. This is the “childish observation”, the “but the Emperor is naked!”, which made cross this famous “imperious and invisible circle which limits a Universe”…

[69] These are mainly the notion of “Riemannian manifold”, and the tensor calculus on such a manifold.

[70] One of the most striking features which distinguishes this model from the Euclidean (or Newtonian) model of space and time, and also from Einstein’s very first model (“special relativity”), is that the global topological form of space-time remains indeterminate, instead of being prescribed imperatively by the very nature of the model. The question of what this global form is strikes me (as a mathematician) as one of the most fascinating in cosmology.

[71] One called “unitary theory” such a hypothetical theory, which would manage to “unify” and to reconcile the multitude of partial theories of which it was question. I have the feeling that the fundamental thinking that awaits to be undertaken, will have to be placed on two different levels.
1_) A reflection of a “philosophical” nature, on the very notion of a “mathematical model” for a portion of reality. Since the successes of Newtonian theory, it has become an unspoken axiom of the physicist that there exists a mathematical model (or even a single model, or “the” model) to express physical reality perfectly, without “detachment” no burr. This consensus, which has been law for more than two centuries, is like a sort of fossil vestige of a living Pythagorean vision that “Everything is number”. Perhaps this is the new “invisible circle”, which replaced the old metaphysical circles to limit the Universe of the physicist (while the race of the “philosophers of nature” seems definitively extinct, supplanted handily by that of computers…). As long as one likes to dwell on it for a moment, it is quite clear, however, that the validity [of] this consensus is by no means obvious. There are even very serious philosophical reasons which lead to questioning it a priori, or at least to providing very strict limits to its validity. It would be the moment or never to submit this axiom to a tight criticism, and perhaps even, to “demonstrate”, beyond any possible doubt, that it is not founded: that there does not exist a unique rigorous mathematical model, accounting for all the so-called “physical” phenomena listed so far.
Once the very notion of “mathematical model” has been satisfactorily identified, and that of the “validity” of such a model (within the limits of such “margins of error” admitted in the measurements made), the question of a “unitary theory” or at least that of an “optimum model” (in a sense to be specified) will finally be clearly stated. At the same time, one will probably also have a clearer idea of the degree of arbitrariness which is attached (by necessity, perhaps) to the choice of such a model.
2_) It is only after such reflection, it seems to me, that the “technical” question of identifying an explicit model, more satisfactory than its predecessors, takes on its full meaning. It would then be the moment, perhaps, to break free from a second tacit axiom of the physicist, going back to antiquity, and deeply rooted in our very way of perceiving space: it is that of continuous nature of space and time (or space-time), of the “place” therefore where “physical phenomena” take place.
Fifteen or twenty years ago, leafing through the modest volume constituting Riemann’s complete work, I was struck by a remark from him “by the way”. He observes that it could well be that the ultimate structure of space is “discrete”, and that the “continuous” representations which we make of it perhaps constitute a simplification (excessive perhaps, in the long run…) of a more complex reality; that for the human mind, “the continuous” was easier to grasp than “the discontinuous”, and that it serves us, therefore, as an “approximation” for understanding the discontinuous. This is a remark surprisingly penetrating into the mouth of a mathematician, at a time when the Euclidean model of physical space had never before been questioned; in the strictly logical sense, it is rather the discontinuous which, traditionally, has served as a technical method of approach to the continuous.
Developments in mathematics in recent decades have, moreover, shown a much more intimate symbiosis between continuous and discontinuous structures than was previously imagined in the first half of this century. Still, to find a “satisfactory” model (or, if necessary, a set of such models, “connecting” as satisfactorily as possible..), that this one be “continuous”, “discrete” “or of a” mixed “nature – such work will undoubtedly involve a great conceptual imagination, and a consummate flair for apprehending and updating mathematical structures of a new type. This kind of imagination or “flair” seems rare to me, not only among physicists (where Einstein and Schrödinger seem to have been among the rare exceptions), but even among mathematicians (and here I speak with full knowledge of the facts).
To sum up, I predict that the expected renewal (if it has yet to come…) will come more from a mathematician at heart, knowledgeable about the great problems of physics, than from a physicist. But above all, it will take a man with “philosophical openness” to grasp the crux of the matter. This is by no means technical in nature, but a fundamental problem of “philosophy of nature”.

[72] I make no claim to be familiar with Einstein’s work. In fact, I haven’t read any of his work, and only know his ideas through hearsay and very roughly. Yet I feel like I can make out “the forest”, even though I’ve never had to make the effort to scrutinize any of its trees. . .

[73] For comments on the qualifier “moribund”, see a previous footnote (note page 55).

[74] I think I understand (by echoes that have come back to me from various sides) that we generally consider that in this century there have been three “revolutions” or great upheavals in physics: Einstein’s theory, the discovery of radioactivity by the Curies, and the introduction of quantum mechanics by Schrödinger.