Here is ma latest contribution to Entreprise Romande, it dates back to february 2020, that is before the Covid19 lockdown… 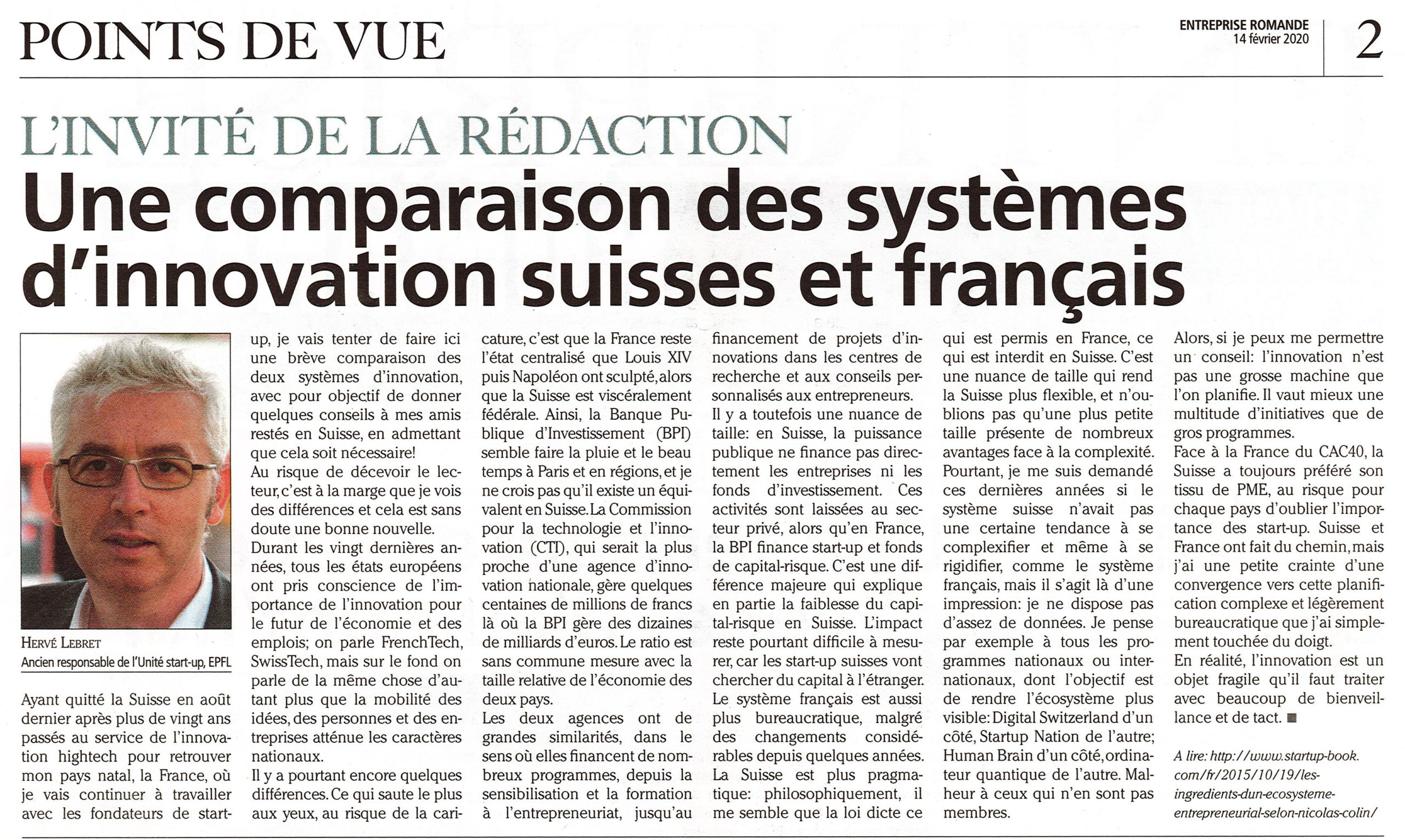 A comparison of the Swiss and French innovation ecosystems.
Hervé Lebret, former head of the start-up unit, EPFL.

Having left Switzerland last August after more than twenty years at the service of high-tech innovation to come back to my beautiful native country, France, where I will continue to work with the founders of startup, I will try to make here a brief comparison of the two innovation systems, with the aim of giving some advice to my friends who stayed in Switzerland, assuming that it may not be necessary!

At the risk of disappointing the reader, it is at the margin that I see differences and this is undoubtedly good news. In the past twenty years, all European states have understood the importance of innovation for the future of the economy and jobs; one speaks about FrenchTech, SwissTech, but in reality one speaks all the more of the same thing as the mobility of ideas, people and companies attenuates the national characters.

However, there are still some differences. What strikes the most, at the risk of caricature, is that France remains the centralized state that Louis XIV then Napoleon sculpted while Switzerland is viscerally federal. For example BPIFrance, the National Public Investment Bank, is critical to innovation both in Paris and in the regions and I don’t think there is an equivalent in Switzerland. The CTI, which would be closest to a national innovation agency, manages a few hundred million Swiss Francs where BPI manages tens of billions of Euros. The ratio is out of proportion to the relative size of the economies of the two countries.

The two agencies have great similarities in the sense that they finance a number of programs from awareness-raising and training in entrepreneurship to funding innovation projects in research centers and personalized advice to entrepreneurs. There is, however, a significant nuance: the public authorities do not directly finance companies or investment funds in Switzerland and these activities are left to the private sector, while in France, BPI finances startups and venture capital funds. . This is a major difference which partly explains the weakness of venture capital in Switzerland. The impact remains difficult to measure, however, because Swiss startups find capital abroad.

The French system also remains more bureaucratic despite major changes in recent years. Switzerland remains more pragmatic: philosophically it seems to me that the law expresses what is allowed in France, what is prohibited in Switzerland, it is a nuance which makes Switzerland more flexible and let us not forget that smaller size has many advantages over complexity. However I have wondered in recent years if the Swiss system has not had a certain tendency to become more complex and even to become more rigid like the French system, but this is just a feeling; I do not have enough data. I am refering, for example, of all the national or international programs, the objective of which is to make the ecosystem more visible: Digital Switzerland on the one hand, Startup Nation on the other; Human brain on one side, quantum computer on the other. Woe to those who are not members of them…

So if I can allow some advice, innovation is not a big machine that we can plan. A multitude of initiatives is better than big programs. Faced with the France of the CAC40, Switzerland has always preferred its fabric of SMEs, at the risk for each country to forget the importance of startups. Both countries have positively evolved, but I have a little fear of convergence towards this complex and slightly bureaucratic planning that I briefly mentioned. In reality, innovation is a fragile object, it is necessary to deal with a good deal of benevolence and tact [1].