I am attached to France for obvious reasons. And recently, I have read a lot about French innovation. It’s not as bad as the general public may think but it is not as good as I would like. Still there are reasons for hope. Let me comment two recent works:
– an article from Le Monde newspaper, entitled Heureux comme un patron de start-up en France
– a report from OSEO (the French Innovation Agency) which I had mentioned before in You have to go global, and right from the start, but which I had read too quickly! 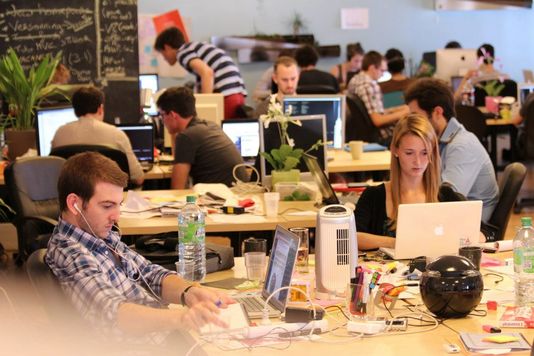 The article from Le Monde is about French Accelerator Le Camping. The article is optimistic (maybe a little too much), but you should read it if you understand French. What I noticed was:

– “The Hexagon can also count on experienced funds such as Partech (but also Idinvest, Apax) who continued to irrigate the area after the bursting of the Internet bubble in 2000. About fifteen venture capital funds finance about a thousand start-ups and inject 200-300 million euros per year in the digital field, said Philippe Collombel. The French industry is one of the best in the world, judges Christopher Bavaria, president of Idinvest. And there are many areas where a little “Frenchy” managed to make a name alongside the leading Anglo-Saxon player: Dailymotion vs. YouTube, Viadeo behind LinkedIn , Deezer on the heels of Spotify …” I think this is dangerously optimistic but nice! We should not be just a copy-paste version of the USA though.

– “Another asset of the Hexagon: its serial entrepreneurs. The first generation began with the Minitel, has launched the digital era in the late 1990s, and overcame the bubble. They include Marc Simoncini (iFrance, Meetic), Jacques-Antoine Granjon (ventre-privée), Patrick Robin (Imaginet, 24h00), Xavier Niel … Twenty years later, they play the “business angels” for the younger: PriceMinister, Dailymotion, Criteo, or Deezer.” Quite true.

– However, “the Business Angels do not support enough entrepreneurs” […] “There are not enough funds enbling jumping from start-up to that of medium-sized companies.”

[You may also be interested about an analysis of the Acceletor trend from the Financial Times, which is also quite good: Start-ups put their foot on the accelerator. “In the past they could have been labelled an incubator, which is apparently different from an accelerator.” […] “Probably the first accelerator was Paul Graham’s Y Combinator in Silicon Valley. Since 2005 it has fostered almost 500 start-ups, including big successes such as AirBnB and Dropbox.” […] “This method of building new companies at warp speed is fascinating. The philosophy is to try lots of different ideas, fail fast, and pivot if something does not work. I like the sense of urgency, the work ethic, the high-pressure environment that helps drive rapid progress, and the incredible opportunities to network and cross-fertilise.” […] “However, in general, I think start-ups take a long time to become viable – years not months – so trying to achieve so much in such a concentrated period of time feels unrealistic.” […] “There are now an estimated 123 accelerator programmes around the world.” […] “Some veterans think many will close, just as many of the projects they incubate will fail. But all this frantic activity will surely boost entrepreneurship, stimulate jobs, and – in the long run – create wealth, so it deserves applause”] 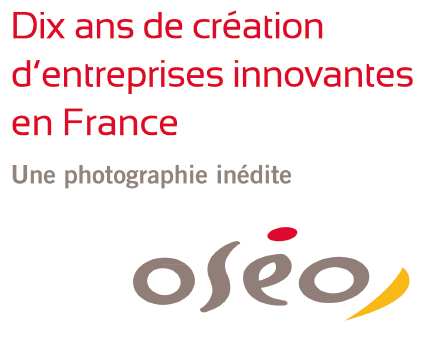 You can find (in French) the OSEO report by clicking on the picture. I was wrong in my previous post, I learnt a few things! And it has more depth than the good Le Monde article. The first one is about the fears and difficulties of entrepreneurs. 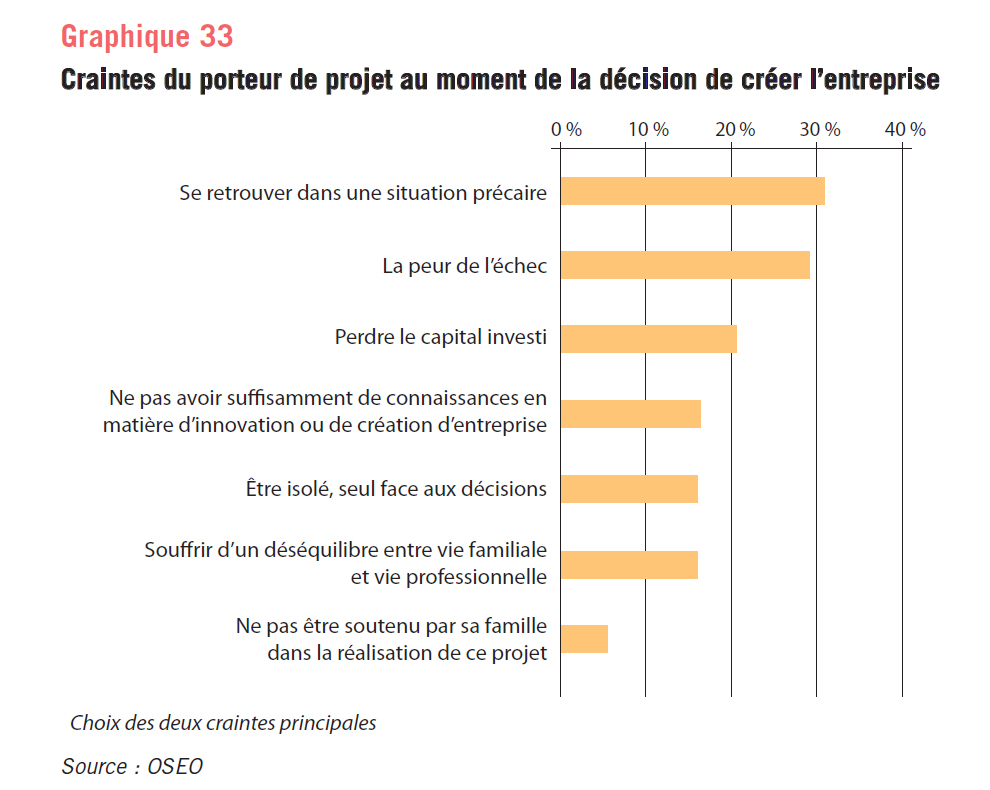 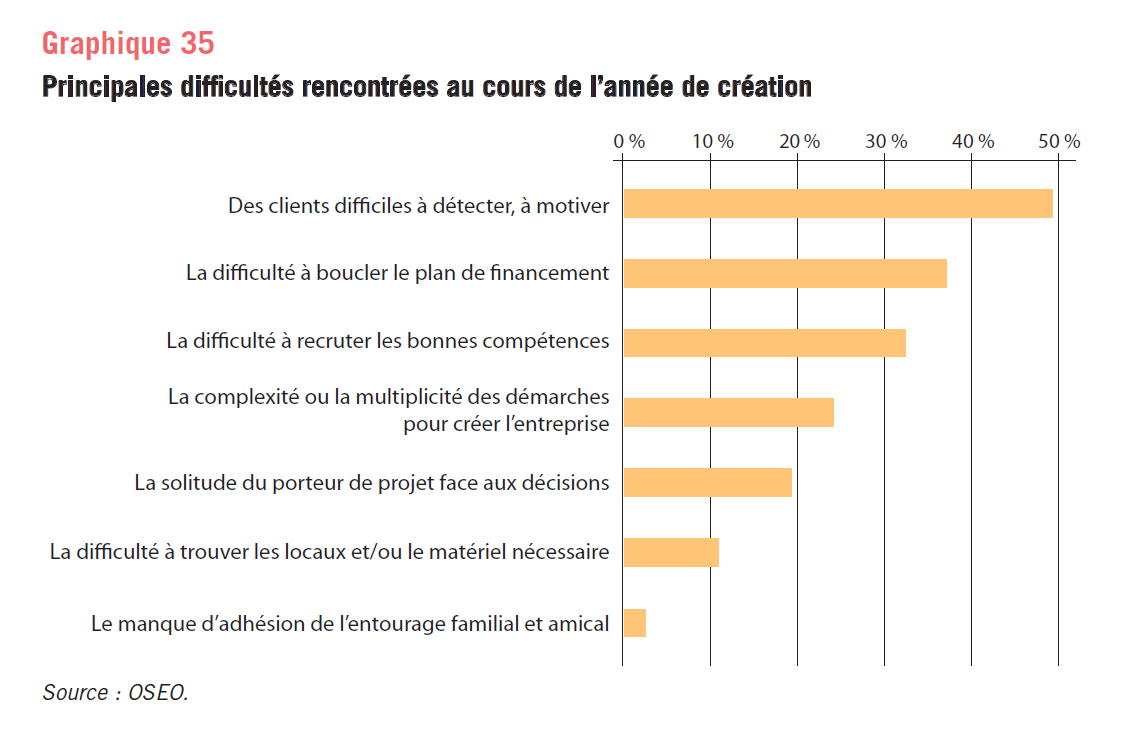 Fear of failing with its attached stigma remains high. Finding customers is the biggest challenge, higher then finding investors. Interesting. Then there is an interesting lesson about the age of founders, which you can compare to an analysis I have made on 165 public companies. 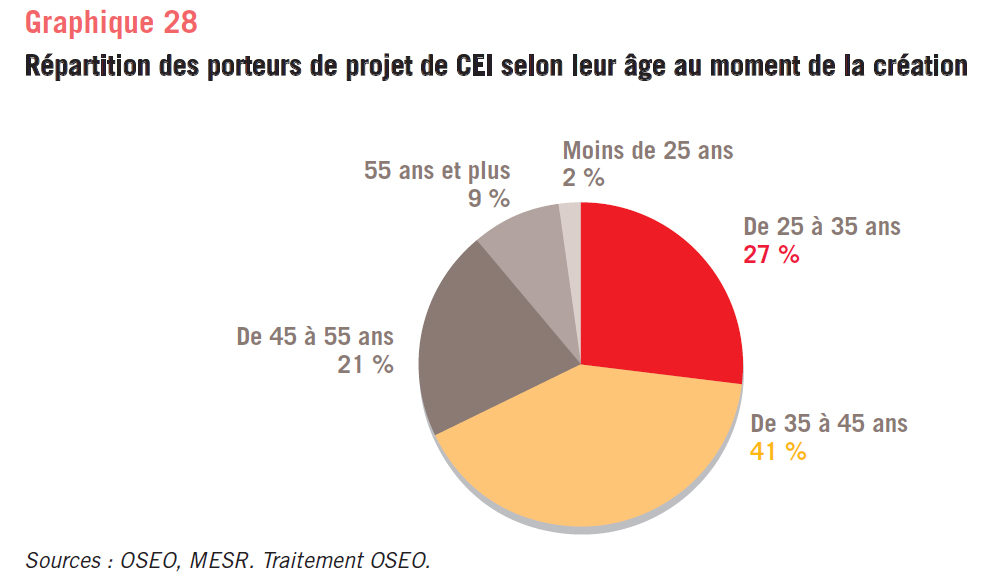 This is a popular topic, and you might read again Wadhwa’s study, his Washington Post article or Is There A Peak Age for Entrepreneurship? I am not sure how to read all this, but I have the feeling there is a tendency to higher age recently… The average age of French founders is 41 whereas the public companies I have have founders with an average of 36.5 (and 34 for the companies founded before 1995).

Finally there is an analysis of “models of development of start-ups”. 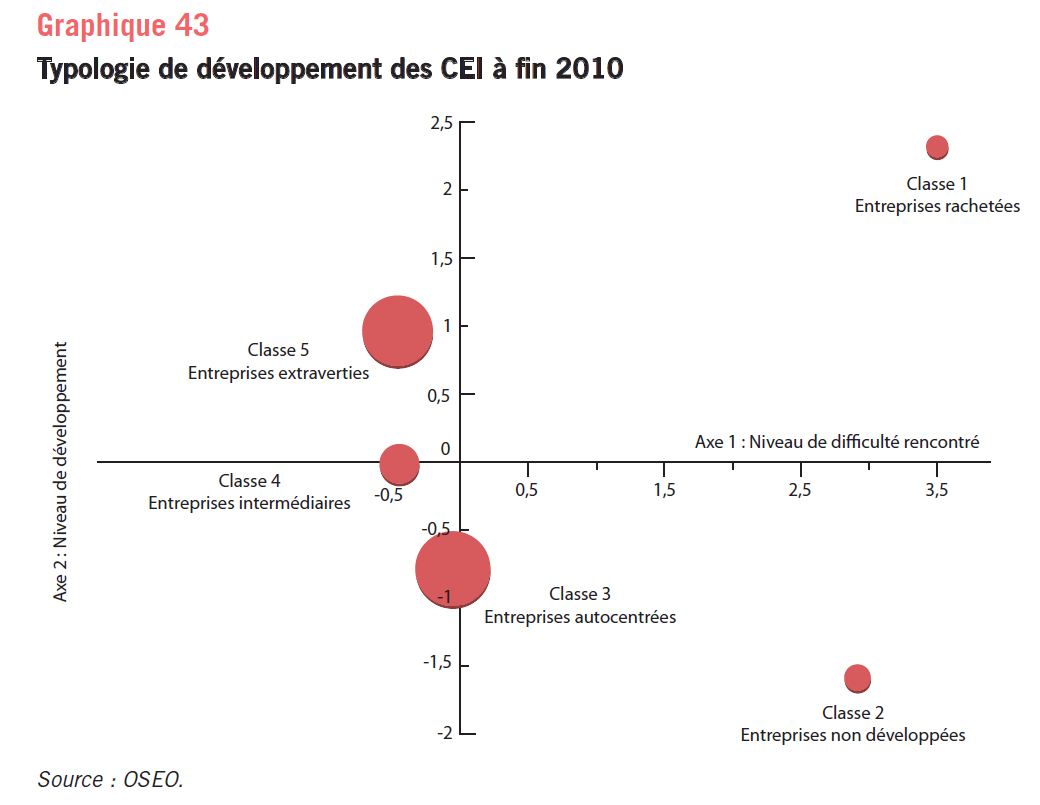 The authors compare 2 main classes of start-ups (out of 5), the ones being the most common (classes 3 and 5 in the figure). [Class 4 is more an intermediate status en route to either 3 or 5; class 1 is M&A and class 5 have not developed at all.]

“In class 3, 41% of the total population, companies have a lower level of development because the company is “self-centered”. 50% have no partner, no subsidiary. The project leader is still a dominant position in the capital: 68% have a stake greater than 75% in this class; 1 out of 2 still 50% to 75% of capital.”

“In contrast, firms in class 5, have a proven open behavior. They have opened their capital to have the resources to advance an innovation project. 60% of project owners have less than 25% of the start-up in this class, as well as half of them with between 25% and 50% of the capital. Moreover, almost all listed companies are in this class. 80% of these companies are internationalized (export or implantation).”

“These are companies that have had time to grow: almost half who them are more than 8 years old and almost 40% are between 5 and 8 years old today. The maturity only does not explain, however, their momentum. Indeed, they were faced, too, with problems of redefining their business plans as well as those of class 3, even a little more frequently. However, they saw this less as a constraint.”

“In addition, Class 3 focuses more on public funding which is considered a main lever for growth. The youth of this population and the lower opening of their capital can hypothesize that the public support at the pre-seed and seed stages is an essential substitute to private capital.”

Of course the conclusion of the report is to encourage the filtering and then development towards class 5. but myless optimistic conclusion is that even class 5 companies are not big success stories…