I have already talked about statistics here, and not in good terms. It was mostly related to Nicholas Nassim Taleb‘s works, The Black Swan and Antifragile. But this does not mean statistics are bad. They may just be dangerous when used stupidly. It is what Charles Wheelan explains among otehr things in Naked Statistics. 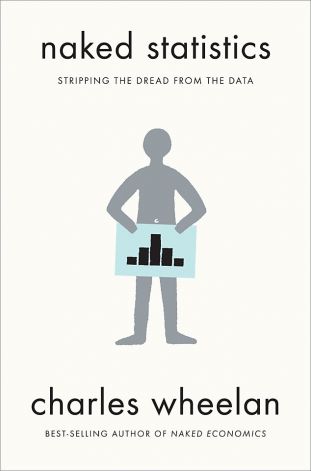 Naked Statistics belongs to the group of Popular Science. Americans often have a talent to explain science for a general audience. Wheelan has it too. So if you do not know about or hate the concepts of mean/average, standard deviation, probability, regression analysis, and even central limit theorem, you may change your mind after reading his book.

Also you will be explained the Monty Hall problem or equivalent Three Prisoners problem or why it is sometimes better (even if counterintuitive) to change your mind.

Finally Wheelan illustrates why statistics are useless and even dangerous when the data used are badly built or irrelevant (even if the mathematical tools are correctly used!). Just one example in scientific research (which is another topic of concern to me) “This phenomenon can plague even legitimate research. The accepted convention is to reject a hypothesis when we observe something that would happen by chance only 1 in 20 times or less if the hypothesis were true. Of course, if we conduct 20 studies, or if we include 20 junk variables in a single regression equation, then on average, we will get 1 bogus statistically significant finding. The New York Times magazine captured this tension wonderfully in a quotation from Richard Peto, a medical statistician and epidemiologist: “Epidemiology is so beautiful and provides such an important perspective on human life and death, but an incredible amount of rubbish is published”.
Even the results of clinical trials, which are usually randomized experiments and therefore the gold standard of medical research, should be viewed with some skepticism. In 2011, the Wall Street Journal ran a front-page story on what it described as one of the “dirty little secrets” of medical research: “Most results, including those that appear in top-flight peer-reviewed journals, can’t be reproduced. […] If researchers and medical journals pay attention to positive findings and ignore negative findings, then they may well publish the one study that finds a drug effective and ignore the nineteen in which it has no effect. […] On top of that, researchers may have some conscious or unconscious bias, either because of a strongly held prior belief or because a positive finding would be better for their career. (No one ever gets rich or famous by proving what doesn’t cure cancer. […] Dr. Ionnadis [a Greek doctor and epidemiologist] estimates that roughly half of the scientific papers published will eventually turn out to be wrong.” [Pages 222-223]