I should have begun with Genentech this series of posts about Biotech (see part 1: Amgen or part 2 about more general stats). Genentech was not the first biotech start-up, it was Cetus, but Genentech was really the one which launched and defined this industry. All this really began with the Cohen Boyer collaboration. Genentech would have loved to get an exclusive license on their patent about recombinant DNA, but the universities could not agree for business as well as political reasons. Genentech was an unknown little start-up and genetic engineering a very sensitive topic at the time. Swanson had tried even to offer shares to Stanford and UCSF (the equivalent of 5% of the existing shares at the time).

Please note I already wrote about Genentech here in Bob Swanson & Herbert Boyer: Genentech. But this new post follows my reading of Genentech – The Beginnings of Biotech by Sally Smith Hughes. 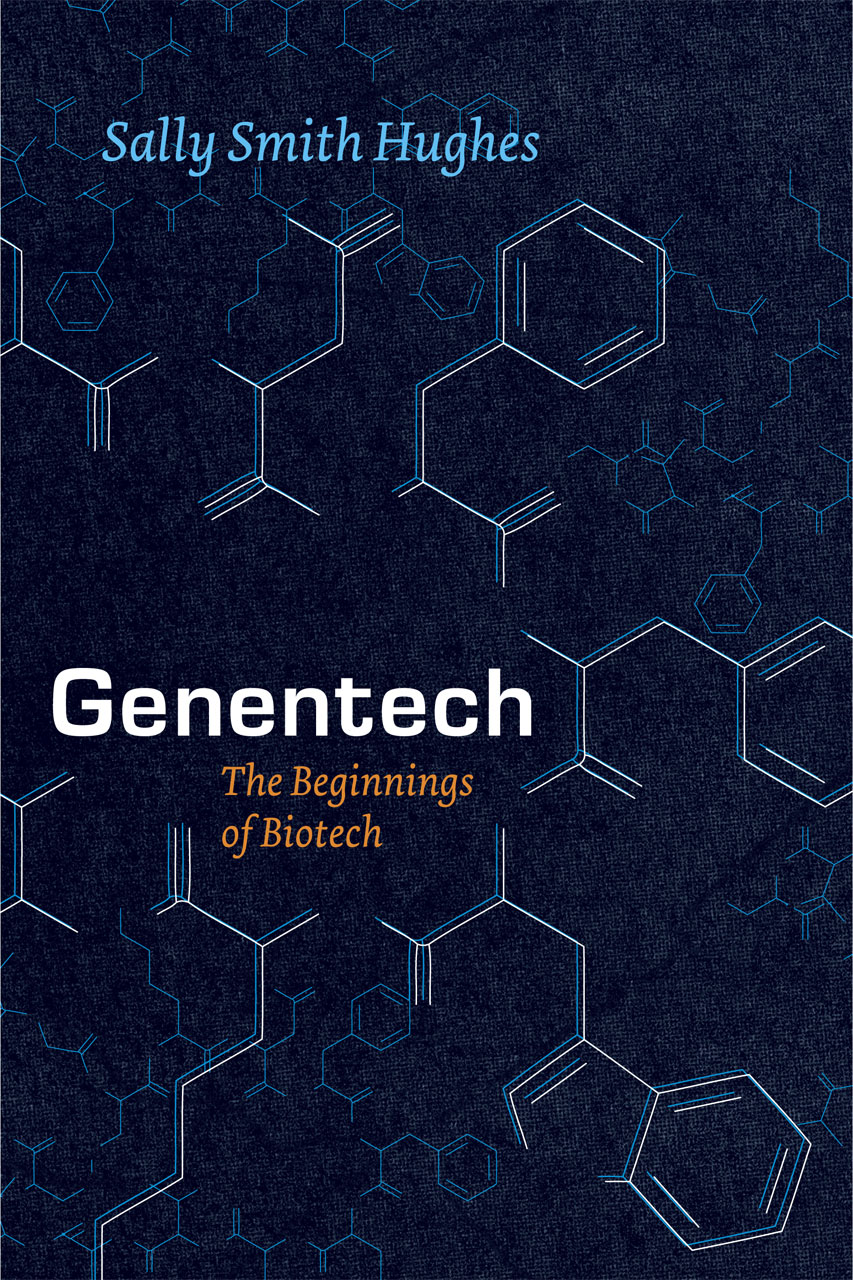 I have to admit I had never heard of the Bancroft Library’s website (http://bancroft.berkeley.edu/ROHO/projects/biosci) for the Program in Bioscience and Biotechnology Studies, “which centerpiece is a continually expanding oral history collection on bioscience and biotechnology [with ] in-depth, fully searchable interviews with basic biological scientists from numerous disciplines; with scientists, executives, attorneys, and others from the biotechnology industry.”

Swanson was captivated: “This idea [of genetic engineering] is absolutely fantastic; it is revolutionary; it will change the world; it’s the most important thing I have ever heard.” [… But Swanson was nearly alone.] “Cetus was not alone in its hesitation regarding the industrial application of recombinant DNA technology. Pharmaceutical and chemical corporations, conservative institutions at heart, also had reservations.” [Page 32] “Whatever practical applications I could see for recombinant DNA… were five to ten years away, and, therefore, there was no rush to get started, from a scientific point of view.” [Page 32] “I always maintain” Boyer reminisced, “that the best attribute we had was our naïveté… I think if we had known about all the problems we were going to encounter, we would have thought twice about starting… Naïveté was the extra added ingredient in biotechnology.” [Page 36]

The book shows the importance of scientific collaborations. Not just Boyer at UCSF but for example with a hospital in Los Angeles. A license was signed with City of Hope Hospital with a 2% royalty on sales on products based on the licensed technology. “[…] negotiated an agreement between Genentech and City of Hope that gave Genentech exclusive ownership of any and all patents based on the work and paid the medical center a 2 percent royalty on sales of products arising from the research.” [Page 57]

Even if in 2000, City of Hope had received $285M in royalties, it was not happy with the outcome. After many trials, the California Supreme Court in 2008 awarded another $300M to City of Hope. So the book shows that these collaborations gave also much legal litigation. [Page 58]

In a few years, Genentech could synthesize somatostatin, insulin, human growth hormone and interferon. It is fascinating to read how intense, uncertain, stressful these years were for Swanson, Perkins, Boyer and the small group of Genentech employees and academic partners (Goeddel, Kleid, Heyneker, Seeburg, Riggs, Itakura, Crea), in part because of the emerging competition from other start-ups (Biogen, Chiron) and academic labs (Harvard, UCSF).

“On August 25, 1978 – four days after Goeddel’s insulin chain-joining feat – the two parties signed a multimillion-dollar, twenty-year research and development agreement. For an upfront licensing fee of $500,000, Lilly got what it wanted: exclusive worldwide rights to manufacture and market human insulin using Genentech’s technology. Genentech was to receive 6 percent royalties and City of Hope 2 percent royalties on product sales.” [Page 94] They managed to negotiate a contractual condition limiting Lilly’s use of Genentech’s engineered bacteria to the manufacture of recombinant insulin alone. The technology would remain Genentech’s property, or so they expected. As it turned out, the contract, and that clause in particular, became a basis for a prolonged litigation. In 1990, the courts awarded Genentech over $150 million in a decision determining that Lilly had violated the 1978 contract by using a component of Genentech’s insulin technology in making its own human growth hormone product. [Page 95] Perkins believed that the 8 percent royalty rate was unusually high, at a time when royalties on pharmaceutical products were along the lines of 3 or 4 percent. “It was kind of exorbitant royalty, but we agreed anyway – Lilly was anxious to be first (with human insulin)” […]The big company – small company template that Genentech and Lilly promulgated in molecular biology would become a prominent organizational form in a coming biotechnology industry. [Page 97]

The invention of a new culture

Young as Swanson was, he kept everyone focused on product-oriented research. He continued to have scant tolerance for spending time, effort, and money on research not tied directly to producing marketable products. “We were interested in making something usable that you could turn into a drug, inject in humans, take to clinical trials.” A few year before his premature death, Swanson remarked, “I think one of the things I did best in those days was to keep us very focused on making a product.“ His goal-directed management style differed markedly from that of Genentech’s close competitors. [Page 129]

But at the same time Boyer would guarantee a high quality research level by encouraging employees to write the best possible scientific articles. This guaranteed the reputation of Genentech in the academic world.

A culture was taking shape at Genentech that had no exact counterpart in industry or academia. The high-tech firms in Silicon Valley and along Route 128 in Massachusetts shared its emphasis on innovation, fast-moving research, and intellectual property creation and protection. But the electronics and computer industries, and every other industrial sector for that matter, lacked the close, significant, and sustained ties with university research that Genentech drew upon from the start and that continue to define the biotechnology industry of today. Virtually every element in the company’s research endeavor – from its scientists to its intellectual and technological foundations – had originated in decade upon decade of accumulated basic-science knowledge generated in academic labs. […] At Boyer’s insistence, the scientists were encouraged to publish and engage in the wide community of science. [Page 131]

But academic values had to accommodate corporate realities: at Swanson’s insistence, research was to lead to strong patents, marketable products, and profit. Genentech’s culture was in short a hybrid of academic values brought in line with commercial objectives and practices. [Page 132]

Swanson was the supportive but insistent slave driver, urging on employees beyond their perceived limits: “Bob wanted everything. He would say, If you don’t have more things on your plate than you can accomplish, then you’re not trying hard enough. He wanted you to have a large enough list that you couldn’t possibly get everything done, and yet he wanted you to try.” […] Fledging start-ups pitted against pharmaceutical giants could compete mainly by being more innovative, aggressive, and fleet of foot. Early Genentech had those attributes in spades. Swanson expected – demanded – a lot of everyone. His attitude was as Roberto Crea recalled: “Go get it; be there first; we have to beat everybody else… We were small, undercapitalized, and relatively unknown to the world. We had to perform better than anybody else to gain legitimacy in the new industry. Once we did, we wanted to maintain leadership.” […] As Perkins said “Bob would never be accused of lacking a sense of urgency. “ […] Even Ullrich, despite European discomfort with raucous American behavior, admitted to being seduced by Genentech’s unswervingly committed, can-do culture. [Page 133]

Initially Kleiner thought Genentech would be acquired by a major pharma company. It was just a question of when. He approached Johnson and Johnson and “floated the idea of a purchase price of $80 million. The offer fell flat. Fred Middleton [Genentech’s VP of finance], present at the negotiations, speculated that J&J didn’t have “a clue about what to do with this [recombinant DNA] technology – certainly didn’t know what it was worth. They couldn’t fit it in a Band-Aid mold”. J&J executives were unsure how to value Genentech, there being no standard for comparison or history of earnings.” [Page 140]

Perkins and Swanson made one more attempt to sell Genentech. Late in 1979, Perkins, Swanson, Kiley and Middleton boarded a plane for Indianapolis to meet with Eli Lilly’s CEO and others in top management. Perkins suggested a selling price of $100 million. Middleton’s view is that Lilly was hamstrung by a conservative “not invented here” mentality, an opinion supported by the drug firm’s reputation for relying primarily on internal research and only reluctantly on outside contracts. The company’s technology was too novel, too experimental, too unconventional for a conservative pharmaceutical industry to adopt whole-heartedly. [Page 141]

When Genentech successfully developed interferon, a new opportunity happened. Interferon had been discovered in 1957 and thought to prevent virus infection. In November 1978, Swanson signed a confidential letter of intent with Hoffmann – La Roche and a formal agreement in January 1980. They were also lucky: “Heyneker and a colleague attended a scientific meeting in which the speaker – to everyone’s astonishment given the field’s intense competitiveness – projected a slide of a partial sequence of fibroblast interferon. They telephoned the information to Goeddel, who instantly relay the sequence order to Crea. […] Crea started to construct the required probes. […] Goeddel constructed a “library” of thousands upon thousands of bacterial cells, seeking ones with interferon gene. Using the partial sequence Pestka retrieved, Goeddel cloned full-length DNA sequences for both fibroblast and leukocyte interferon. […] In June 1980, after filing patent protection, Genentech announced the production in collaboration with Roche.” [Page 145] Genentech could consider going public and after another fight between Perkins and Swanson, Genentech decided to do so. Perkins had seen that the year 1980 was perfect for financing biotech companies through a public offering but Swanson saw the challenges this would mean for a young company with nearly no revenue or product.

The 1980-81 period would see the creation of a fleet of entrepreneurial biology-based companies – Amgen, Chiron, Calgene, Molecular Genetics, Integrated Genetics, and firms of a lesser note – all inspired by Genentech’s example of a new organizational model for biological and pharmaceutical research. Before the IPO window closed in 1983, eleven biotech companies in addition to Genentech and Cetus, had gone public*. […] But not only institutions were transformed. Genentech’s IPO transformed Herb Boyer, the small-town guy of blue-collar origins, into molecular biology’s first industrial multimillionaire. For admiring scientists laboring at meager academic salaries in relative obscurity, he became a conspicuous inspiration for their own research might be reoriented and their reputation enhanced. If unassuming Herb – just a guy from Pittsburgh, as a colleague observed – could found a successful company with all the rewards and renown that entailed, why couldn’t they? [Page 161]

Following these three posts, I might write a fourth one about academic licenses in the biotechnology if and when I find some time…