Failure and success are keywords in the world of start-ups. They even generate some heated debate, at least in Europe, when it is a question of surviving as long as possible until customers materialize or failing fast so that one avoids wasting precious time. The debate is difficult because all entrepreneurs deserve respect (yes, it is a tough job) and because slow and controlled growths (including survival modes) vs. fast and risky growths (with the risk of failing fast) may apply to totally different ventures. Here are therefore some figures that may contribute to the debate.

I must add that my motivation comes from a report published by ETHZ (the Swiss Federal Institute of technology in Zurich) about its start-ups, The performance of Spin-off companies at the Swiss Federal Institute of Technology Zurich. A 90% survival rate after 5 years was shown. But what are the typical survivate rates of firms? I searched the web sites of the US and Swiss institutes of statistics and the following chart illustrates the rates of the two countries for their entreprises overall. 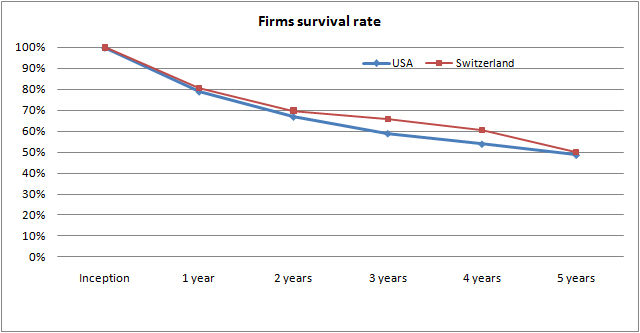 In high-tech, the survival rates seem to be even higher. The authors of the report I mention above give figures as high as 70% to 90% for 5 years. Zunfu Zhang in his excellent “High-Tech Start-Ups and Industry Dynamics in Silicon Valley” (dated 2003 ) published the following curves: 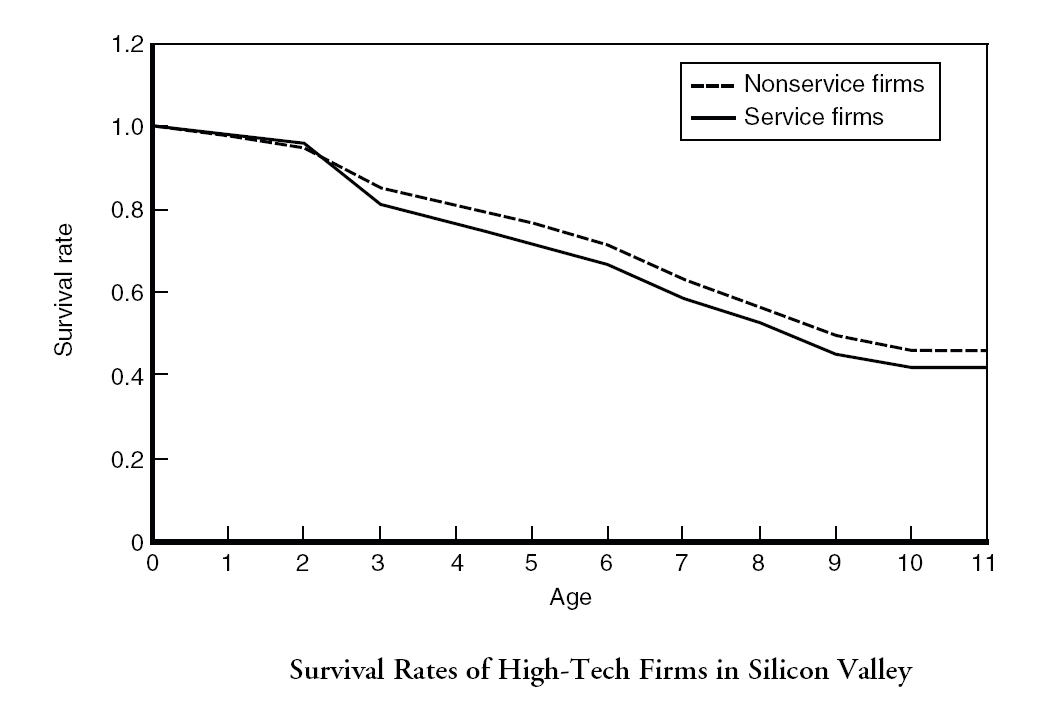 The survival rates after 5 years are 76% for “non-service firms” and 72% for “service firms”. The authors of the ETHZ report added: “The low survival rate in the US – where some of the most successful University spin-offs have been created – raises, however, the question whether a high survival rate is actually desirable or whether too strong a focus on creating ‘surviving’ spin-offs does not eliminate some of the potentially very successful ventures that may not look so promising or too risky.”

As a footnote, I had added, the saying is pronounced “Shi Bai Nai Cheng Gong Zhi Mu” and means “failure is the mother of success”. There is a very similar quote by T. J. Rogers, founder of Cypress and another Silicon Valley icon: “failure is a prerequisite to success”. A Chinese student, Jie Wu, noticed the similarity. I would like to thank him for this. It might be encouraging to end this [post] with a quote, which shows that Silicon Valley mentality can be developed elsewhere. What we need to digest is that failure is not negative, but trying is what counts.

3 thoughts on “Survival or failure – which success?”