Biotech is a strange world for me. I am an IT guy and I have never really understood much about biology. The biotech start-ups are also very different from IT companies. It is well-known that it takes them years to reach revenues with products (not R&D revenue), not to say profitability (just like the semiconductor industry). It does not prevent them from going public early (just as Internet start-ups did in the late 90s!). So it is a strange mix of features of hardware and software companies.

In a series of documents on the biotech history, I could find the following quote related to Genentech: “Late in 1979, Tom Perkins pushed the idea of a public offering. Although the technology was young, and we were early on in the development of products, there was enough interest in the public to get a public offering done. This was a foreign concept at the time. While we had a couple million dollars in revenue–! think it was $3.5 million in revenues in 1979-there were no product revenues or profits generated from products. Whether or not you could take a company public that didn t have product revenue, didn t have commercialized products, and didn t have significant profits, was an unknown. In the mid to late seventies, if companies went public, they had revenues and earnings. You d have at least $10 million in revenues and at least a million dollars in profit, then maybe you could have one of the small high-tech underwriters take you public.”

Secondly, the founders are seldom the typical nerds with some great business vision (Gates, Jobs, Brin/Page, Zuckerberg) but often university professors/researchers. They do not have to quit their academic position and often take the title of chief scientist. (This also happens in the hardware academic spin-offs, with Atheros as an example I mentioned in a recent post).

As a first illustration of all this, I will just show some data about Chiron. My next post will be about Genzyme and I will conclude with general elements in the 3rd and final post.

Chiron was one of the early start-ups in biotech. It was founded in August 1981 and went public in May 1983… 2.2 years! It had three founders Edward Penhoet, William Rutter and Pablo Valenzuela who were respectively 41, 54 and 40 years old when Chiron was founded. Not kids in their early twenties! Their activity at time of foundation was professor at Berkeley, professor at UCSF, researcher at UCSF. 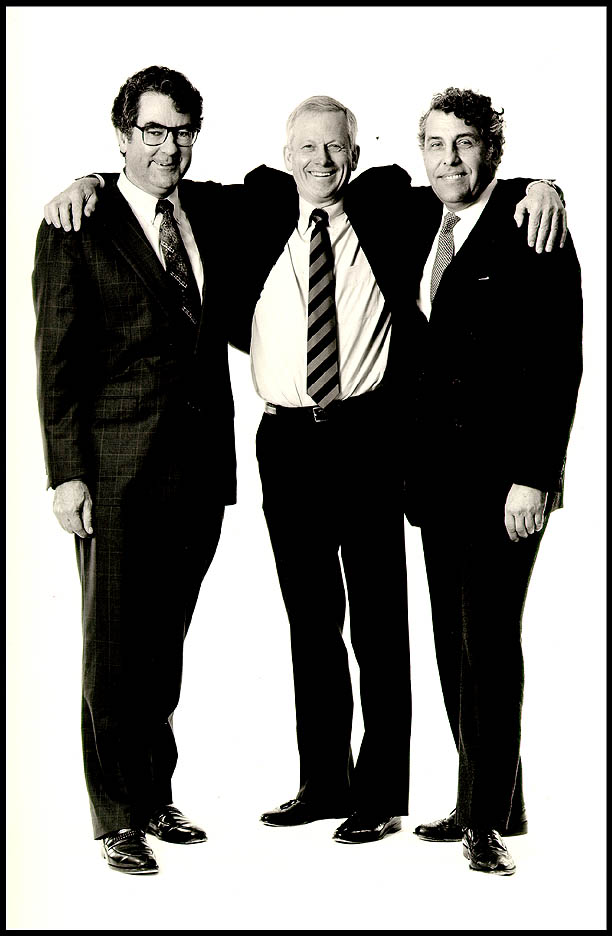 Chiron was bought in 2006 by Novartis and it is not the only biotech start-up acquired by an European corporation as we will see soon. 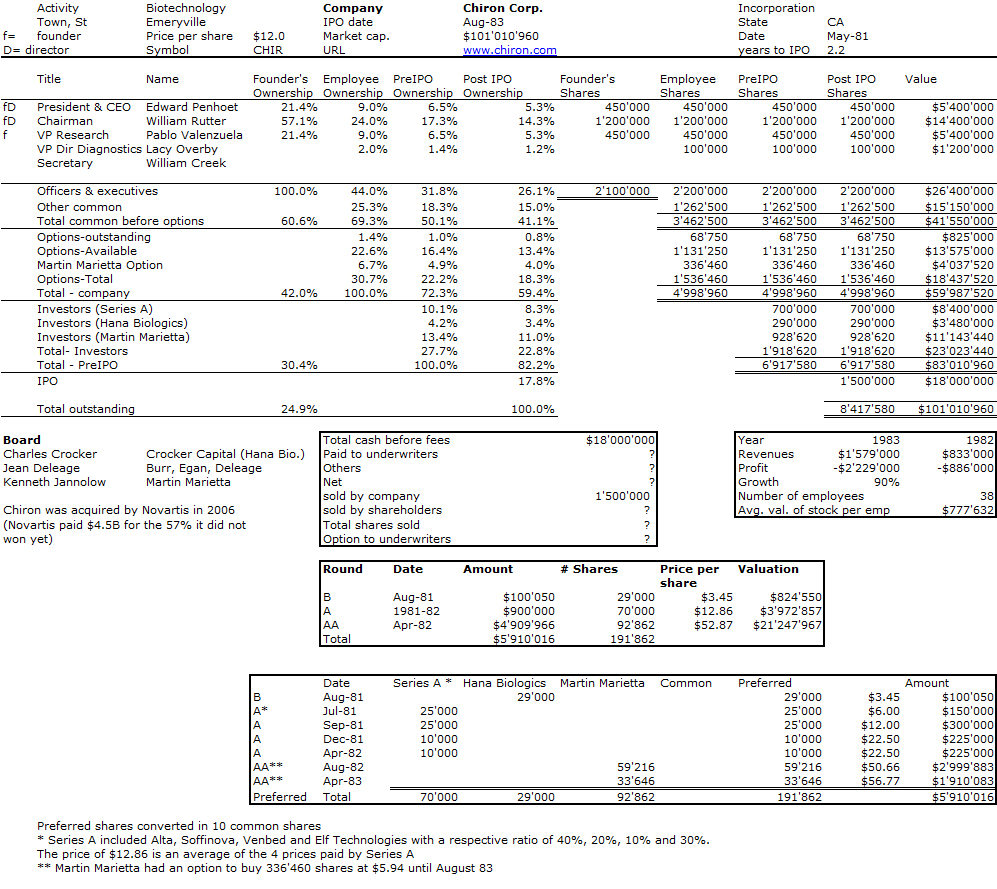 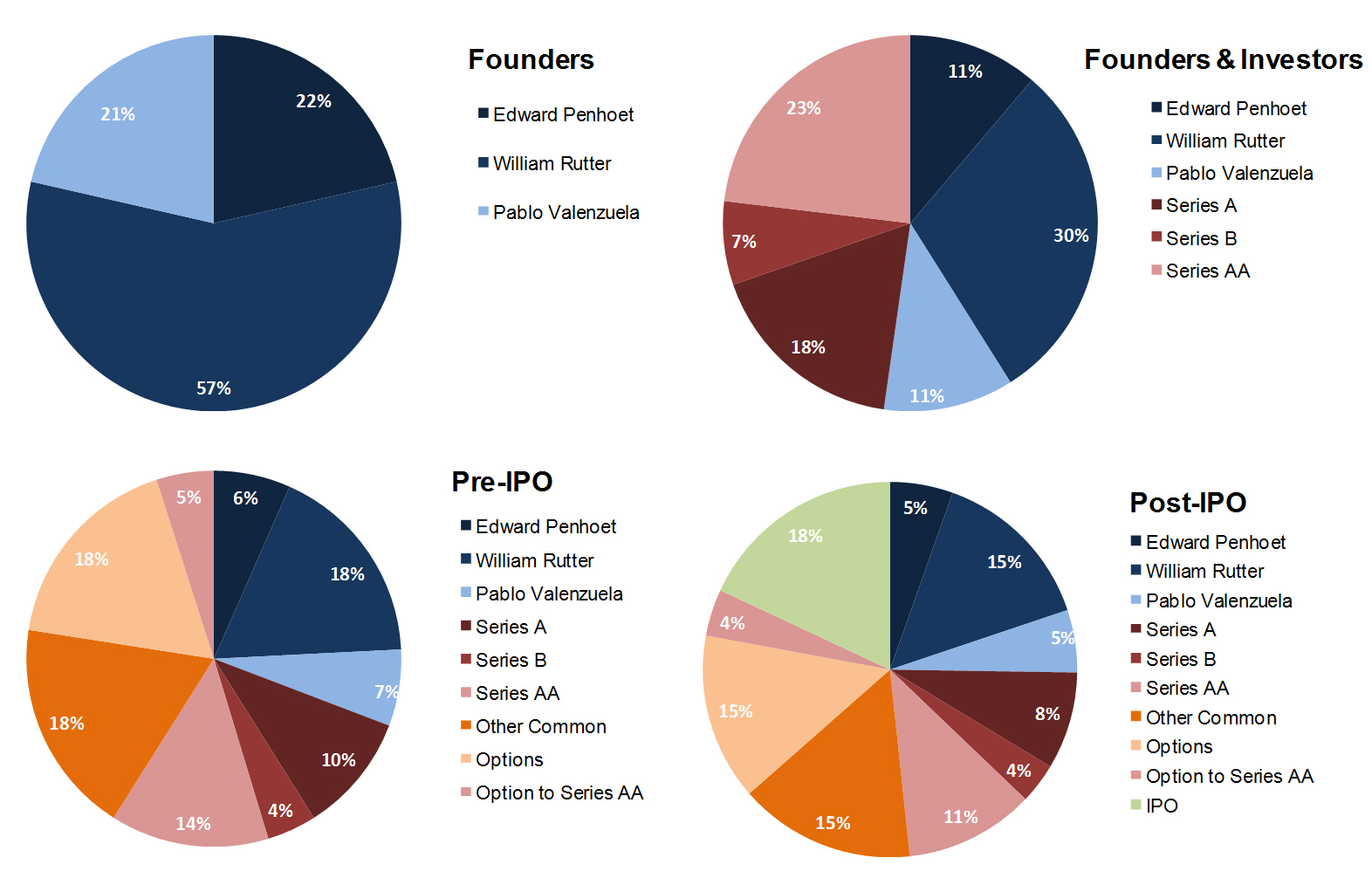