After reading Clayton Christensen, Geoffrey Moore and Steve Blank, I was expecting a lot from The Lean Startup by Eric Ries. I was disappointed. It could be that I did not read it well or too fast, but I was expecting much more. But instead of saying what I did not like, let me begin with the good points. 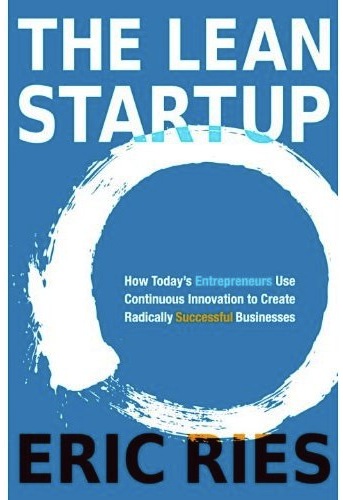 Just like the previous three authors, Ries shows that innovation may be totally counterintuitive: “My cofounders and I are determined to make new mistakes. We do everything wrong. We build a minimum viable product, an early product that is terrible, full of bugs and crash-your-computer-yes-really stability problems. Then we ship it to customers before it’s ready. And we charge money for it. After securing initial customers, we change the product constantly. […] We really had customers, often talked to them and did not do what they said.” [page 4]

On page 8, Eric Ries explains that the lean startup method helps entrepreneurs “under conditions of extreme uncertainty” with a “new kind of management” by “testing each element of their vision”, and “learn whether to pivot or persevere” using a “feedback loop”.

This is he Build-Measure-Learn process. He goes on by explaining why start-ups fail:
1- The first problem is the allure of a good plan. “Planning and forecasting are only accurate when based on a long, stable operating history and a relatively static environment. Startups have neither.”
2- The second problem is the “Just-do-it”. “This school believes that chaos is the answer. This does not work either. A startup must be managed”.
The main and most convincing lesson from Ries is that because start-ups face a lot of uncertainty, they should test, experiment, learn from the right or wrong hypotheses as early and as often as possible. They should use actionable metrics, split-test experiments, innovation accounting. He is also a big fan of Toyota lean manufacturing.

I loved his borrowing of Komisar’s Analogs and Antilogs. For the iPod, the Sony Walkman was an Analog (“people listen to music in a public place using earphones”) and Napster was an Antilog (“although people were willing to download music, they were not willing to pay for it”). [Page 83]

Ries further develops the MVP, Minimum Viable Product: “it is not the smallest product imaginable, but the fastest way to get through the Build-Measure-Learn feedback loop.” Apple’s original iPhone, Google’s first search engine, or even Dropbox Video Demo were such MVPs. More on Techcrunch [page 97]. He adds that MVP does not go without risks, including legal issues, competition, branding and morale of the team. He has a good point about intellectual property [page 110]: “In my opinion, […the] current patent law inhibits innovation and should be remedied as a matter of public policy.”

So why did I feel some frustration? There is probably the feeling Ries gives that his method is a science. [Page 3]: “Startup success can be engineered by following the right process, which means it can be learned, which means it can be taught.” [Page 148]: “Because of the scientific methodology that underlies the Lean Startup, there is often a misconception that it offers a rigid clinical formula for making pivot or persevere decisions. There is no way to remove the human element – vision, intuition, judgment – from the practice of entrepreneurship, nor that would be desirable”. I was probably expecting more recipes, as the ones Blnak gives in The Four Steps to the Epiphany.

So? Art or science? Ries explains on page 161 that pivot requires courage. “First, Vanity Metrics can allow to form false conclusions. […] Second, an unclear hypothesis makes it impossible to experience complete failure, […] Third, many entrepreneurs are afraid. Acknowledging failure can lead to dangerously low morale.” A few pages before (page 154), he writes that “failure is a prerequisite to learning”. Ries describes a systematic method, I am not sure it is a science, not even a process. Indeed, in his concluding chapter, as if he wanted to mitigate his previous arguments, he tends to agree: “the real goal of innovation: to learn that which is currently unknown” [page 275]. “Throughout our celebration of the Lean Startup movement, a note of caution is essential. We cannot afford to have our success breed a new pseudoscience around pivots, MVPs, and the like” [page 279]. This in no way diminishes the traditional entrepreneurial virtues; the primacy of vision, the willingness to take bold risks, and the courage required in the face of overwhelming odds” [page 278].

Let me mention here a video from Komisar. Together with Moore and Blank, he is among the ones who advise reading Ries’ book. I am less convinced than them about the necessity to read this book. I have now more questions than answers, but this may be a good sign! I have been more frustrated than enlightened by the anecdotes he gives or his use of the Toyota strategy. In na interview given to the Stanford Venture Technology program, Komisar talks about how to teach entrepreneurship. Listen to him!

To be fair, Eric Ries is helping a lot the entrepreneurship movement. I just discovered a new set of videos he is a part of, thanks to SpinkleLab.

Fred Destin had also a great post on his blog about the Lean Startup and you should probably read it too to build your own opinion. Lean is hard and (generally) good for you. Fred summaries Lean this way and he is right: “In the real world, most companies do too much development and spend too much money too early (usually to hit some pre-defined plan that is nothing more than a fantasy and / or is not where they need to go to succeed) and find themselves with an impossible task of raising money at uprounds around Series B. So founders get screwed and everyone ends up with a bad taste in their mouth. That’s fundamentally why early stage capital efficiency should matter to you, and why you should at least understand lean concepts.”

Let me finish with a recent interview given by Steve Blank in Finland:
I have devoted the last decade of my life and my “fourth career” to trying to prove that methods for improving entrepreneurial success can be taught. Entrepreneurship itself is more of a genetic phenomenon. Either you have the passion and drive to start something, or you don’t. I believe entrepreneurs are artists, and I’d like to quote George Bernard Shaw to illustrate:

Over the last decade we assumed that once we found repeatable methodologies (Agile and Customer Development, Business Model Design) to build early stage ventures, entrepreneurship would become a “science,” and anyone could do it. I’m beginning to suspect this assumption may be wrong. It’s not that the tools are wrong. Where I think we have gone wrong is the belief that anyone can use these tools equally well.

When page-layout programs came out with the Macintosh in 1984, everyone thought it was going to be the end of graphic artists and designers. “Now everyone can do design,” was the mantra. Users quickly learned how hard it was do design well and again hired professionals. The same thing happened with the first bit-mapped word processors. We didn’t get more or better authors. Instead we ended up with poorly written documents that looked like ransom notes. Today’s equivalent is Apple’s “Garageband”. Not everyone who uses composition tools can actually write music that anyone wants to listen to.

It may be we can increase the number of founders and entrepreneurial employees, with better tools, more money, and greater education. But it’s more likely that until we truly understand how to teach creativity, their numbers are limited. Not everyone is an artist, after all.”