I read this morning about Magma’s acquisition by Synopsys for $507M. In many cases, such an acquisition would look like a success. Here I am not sure…

EDA is an industry I appreciate because it is the perfect description of start-up dynamics. I will not describe it here but if you want to learn more you can read my previous contributions on the topic. I was also lucky to meet the CEOs of both companies, Aart de Geus and Rajeev Madhavan, two legends of the EDA industry, not to say of Silicon Valley (SV). Let me quote myself with a few paragraphs from my book in 2007.

“The only recent success story is Magma Design Automation. Its founder, Rajeev Madhavan, studied in his native country, India, then in Canada. He had founded two successful start-ups, LogicVision (sold to Synopsys) and Ambit (acquired by Cadence). He could have been satisfied enough but Magma became his new adventure.”

I should add that Andy Bechtolsheim, another SV legend, was a business angel in Magma, with investment amounts similar to a VC.

“It is still premature to bet on Magma’s future and its capability of becoming a giant. Some clouds have appeared on the horizon. Litigations are not a rule in Silicon Valley but they do happen. … In early 2005, Synopsys and Magma faced each other concerning the activities of one of Magma’s founders while at Synopsys and the ownership of some patents. The issue was finally resolved in 2007. But in 2005, Magma’s share price dropped by more than 50% from one day to the next and it only recovered two years later.”

Magma’s stock suffered again in the following years as the curve below shows it: 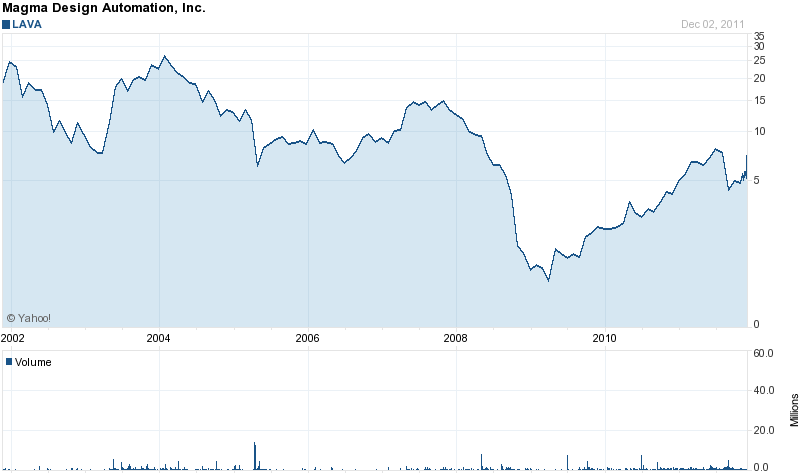 “Costello bitterly complains about a disappearing culture in Silicon Valley. The region has become greedy and individuals forget to give back to the community. There is too much litigation. Out of the ambitious start-ups of the nineties, only Magma has passed the main obstacles. But Magma has not proved yet that it can become a giant. Or will it disappear like Quickturn or Avant! ? No other new start-up seems to have the potential of threatening the established players. In the unstable, dynamic, innovative world of Silicon Valley, this is not a good sign.”

Now EDA is left with three big players, Synopsys, Cadence and Mentor. No start-up seems to be threatening them and the market is not really growing anymore. This is indeed not a good sign.

PS: Just as a reminder and because I now do this often, here is Magma’s data at IPO. Just note it is not very different from the price it is bought for in 2011…

2 thoughts on “The end of a Silicon Valley adventure”