In a recent article from the WSJ (thanks Greg :-), it is claimed that Venture Capital is much less succesful than thought: 3 Out of 4 Start-Ups Fail. Well I am surprised by the surprise. I did some copy paste of the paper below, and I put in bold the things I found interesting. You should jump there and come back here!

I have done my analyis in the past. You can go back to by 2’700 stanford related companies (slide 9 of the pdf) or more anecdotically to Kleiner Perkins first fund. 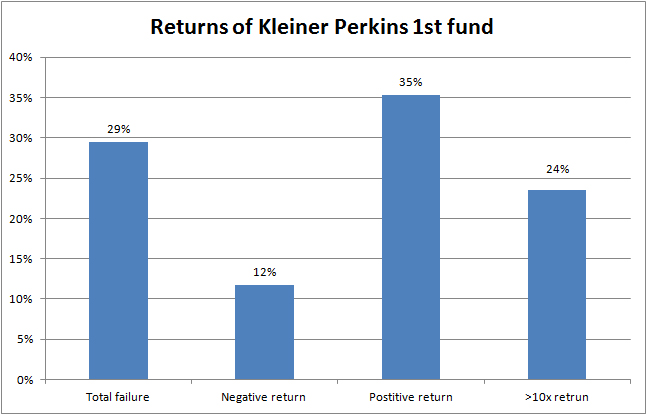 So yes, there is a lot of failure in VC and the numbers do not count so much. It might be that in the past, there were fewer failures than today, and the reasons would be numerous, but the important point in the paper is the following: “the truth is that if you don’t have a lot of failures, then you’re just not doing it right, because that means that you’re not investing in risky ventures”

From the WSJ article:

It looks so easy from the outside. An entrepreneur with a hot technology and venture-capital funding becomes a billionaire in his 20s. But now there is evidence that venture-backed start-ups fail at far higher numbers than the rate the industry usually cites. About three-quarters of venture-backed firms in the U.S. don’t return investors’ capital, according to recent research by Shikhar Ghosh, a senior lecturer at Harvard Business School. Compare that with the figures that venture capitalists toss around. The common rule of thumb is that of 10 start-ups, only three or four fail completely. Another three or four return the original investment, and one or two produce substantial returns. The National Venture Capital Association estimates that 25% to 30% of venture-backed businesses fail.

Mr. Ghosh chalks up the discrepancy in part to a dearth of in-depth research into failures. “We’re just getting more light on the entrepreneurial process,” he says. His findings are based on data from more than 2,000 companies that received venture funding, generally at least $1 million, from 2004 through 2010. He also combed the portfolios of VC firms and talked to people at start-ups, he says. The results were similar when he examined data for companies funded from 2000 to 2010, he says. Venture capitalists “bury their dead very quietly,” Mr. Ghosh says. “They emphasize the successes but they don’t talk about the failures at all.”

There are also different definitions of failure. If failure means liquidating all assets, with investors losing all their money, an estimated 30% to 40% of high potential U.S. start-ups fail, he says. If failure is defined as failing to see the projected return on investment—say, a specific revenue growth rate or date to break even on cash flow—then more than 95% of start-ups fail, based on Mr. Ghosh’s research.
Failure often is harder on entrepreneurs who lose money that they’ve borrowed on credit cards or from friends and relatives than it is on those who raised venture capital.

“People are embarrassed to talk about their failures, but the truth is that if you don’t have a lot of failures, then you’re just not doing it right, because that means that you’re not investing in risky ventures,” Mr. Cowan says. “I believe failure is an option for entrepreneurs and if you don’t believe that, then you can bang your head against the wall trying to make it work.”

Of all companies, about 60% of start-ups survive to age three and roughly 35% survive to age 10, according to separate studies by the U.S. Bureau of Labor Statistics and the Ewing Marion Kauffman Foundation, a nonprofit that promotes U.S. entrepreneurship. Both studies counted only incorporated companies with employees. And companies that didn’t survive might have closed their doors for reasons other than failure, for example, getting acquired or the founders moving on to new projects. Languishing businesses were counted as survivors.

Of the 6,613 U.S.-based companies initially funded by venture capital between 2006 and 2011, 84% now are closely held and operating independently, 11% were acquired or made initial public offerings of stock and 4% went out of business, according to Dow Jones VentureSource. Less than 1% are currently in IPO registration.

—Vanessa O’Connell contributed to this article.
Write to Deborah Gage at deborah.gage@dowjones.com