Very good article by the MIT technology review about technology clusters: In Innovation Quest, Regions Seek Critical Mass. Nothing really new, but it shows again and again how difficult it is to build such clusters and to promote an innovation culture. I just extract a few quotes:

“Clusters exist—it’s empirically proven,” Yasuyuki Motoyama, a senior scholar at the Kauffman Foundation, told me. “But that doesn’t mean governments can create one.”

The problem for governments is that they often try to define where and when innovation will occur. Some attempt to pick and fund winning companies. Such efforts have rarely worked well, says Josh Lerner, a professor at Harvard Business School. Governments can play a role, he says, but they should limit themselves mostly to “setting the table”: create laws that don’t penalize failed entrepreneurs, reduce taxes, and spend heavily on R&D. Then get out of the way.

But can entrepreneurs succeed in creating clusters where governments have had so much difficulty? “The conflict now is between two logics on how to create an ecosystem,” says Fiona Murray, a professor at MIT’s Sloan School, who consults as a kind of therapist to clusters, including London’s TechCity. One is “a government logic that says it’s too important to leave to entrepreneurs, and that you that need specialized inputs, like a technology park.” The other is “purely focused on people and their networks.” Murray believes the answer lies somewhere in the middle. Governments are good at organizing but poor at leading. 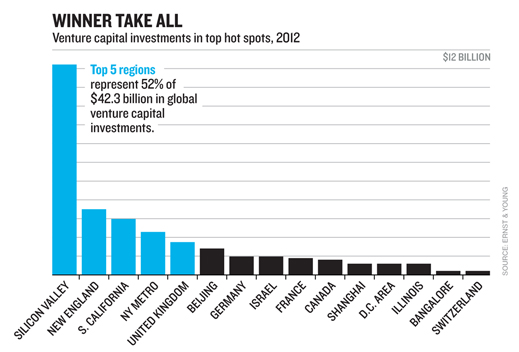