As I said in The Entrepreneurial State: the important role of government in innovation (part 1), Mariana Mazzucato has written an important book even if I do not agree with all her arguments.

We agree on the issue of funding of technologies, inventions and innovations. It has been generally understood that the commercialization of products and their prior development is the responsibility of the private sector in a capitalist economy. The funding of research (at least basic research) is generally the mission of the state, but applied research (though I never really understood what this is) might be done by the State as well as by the private sector.

Let me open a short parenthesis here: I am not of big supporter of the concepts of basic and applied research, but I understand better other concepts from an early to later stage. Here they are: 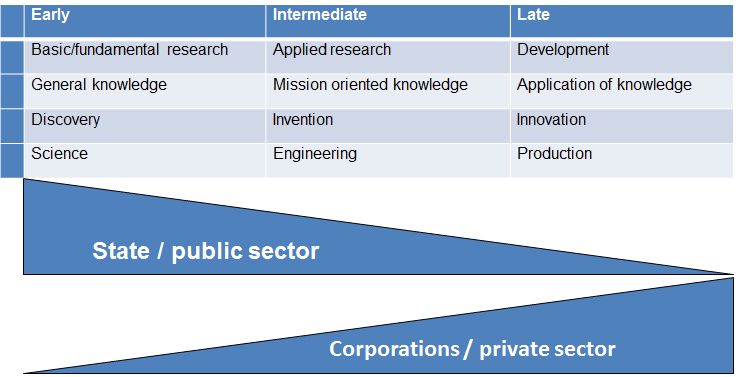 Research has no known output a priori, except knowledge, whereas at a later stage the objectives are a little clearer. This being said, I am not fully comfortable about the arguments Mazzucato brings on the table when she says the State is doing a lot in innovation. But she clearly shows there is a grey zone between the 3 stages I have above. I belong (at least for now) to the group of people who believe it is the mission of the State to be active in the first two ones, and the private sector being in the third. Nothing forbids the private sector to go earlier and the public sector to be more active later, but it is seldom the case. Here are my notes on Chapters 3 and followings:

During a visit of President Mitterand to Silicon Valley, Thomas Perkins which fund started Genentech extolled the virtues of the risk-taking investors who finance the entrepreneurs. Perkins was cut off by Stanford Professor and Nobel Prize Paul berg. He asked, “Where were you guys in the 50’s and 60’s when all the funding that had to be done in the basic science?” [Page 57]

Entrepreneurship, like growth, is one of the least-well understood topics in economics. According to Schumpeter, an entrepreneur is a person willing and able to convert a new idea or invention into a successful innovation (i.e. product, service or process). Entrepreneurship employs the “gale of creative destruction” to replace, in whole or in part, inferior innovations, simultaneously creating new products including new business models. Each major new technology leads to creative destruction. [Page 58]

[Again I need to react: where I fully agree with the Entrepreneurship and Innovation definitions, I am skeptical about the comment on technology: some major new technologies never destroyed anything because they were not commercially successful (artificial intelligence, speech recognition for example and there are many others). I would say major new successful innovations lead to creative destruction. This is important because as Mazzucato rightly says, there is no linear process for innovation and a lot of uncertainty too.]

Entrepreneurship is about risk and is highly uncertain. R&D investments that contribute to technological change not only take years to materialize into new products, but most products developed fail. Silicon Valley model tells a story of “freewheeling entrepreneurs and visionary venture capitalists and yet misses the crucial factor: the military’s role in creating and sustaining it. [Mazzucato shows the same issues in Pharma where the big players develop me-too drugs and let the State fund radical innovations in universities, as is shown in the anecdote above with Mitterand, Perkins and Berg.] 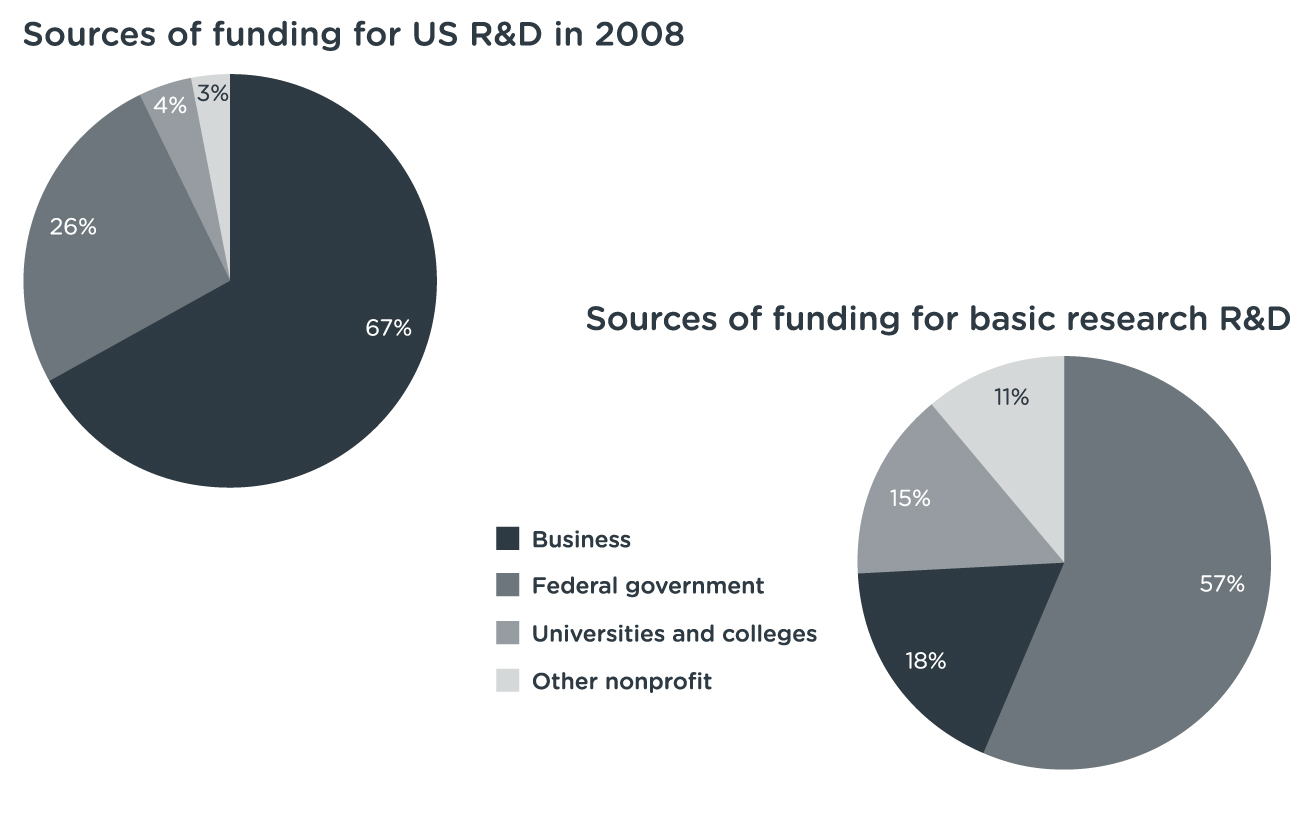 Again, I have some concerns with this decription. First in the image above, I would have liked to see the R vs. D and not only the fundamental R vs global R&D. Mazzucato is right in the funding of research, no doubt about it. I used such data for many years where the funding of research in universities by the industry is 4-7% whereas the federal funding is around 60%! You can look at Figures 1 and 2 below. But then, when it comes to innovation, I do not see where the State produced the biotech or IT industry. It made inventions available. You still needed the visionary entrepreneurs and investors as I told about in the Genentech case on my blog a few years ago [see Bob Swanson & Herbert Boyer: Genentech
and Robert Swanson, 1947-1999] 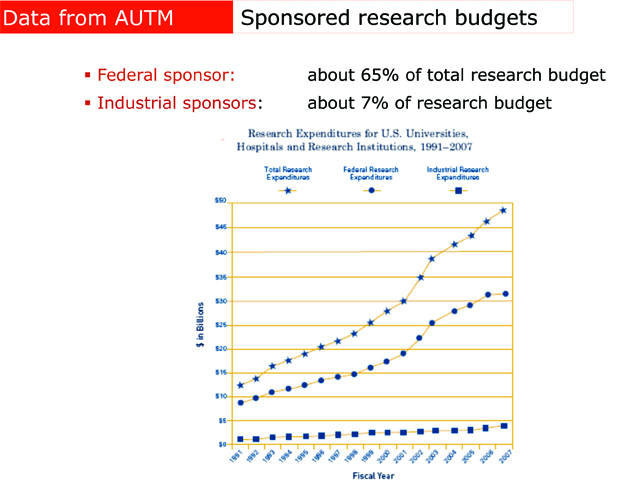 Figure 1: Federal and Industry funding of university research in the USA. 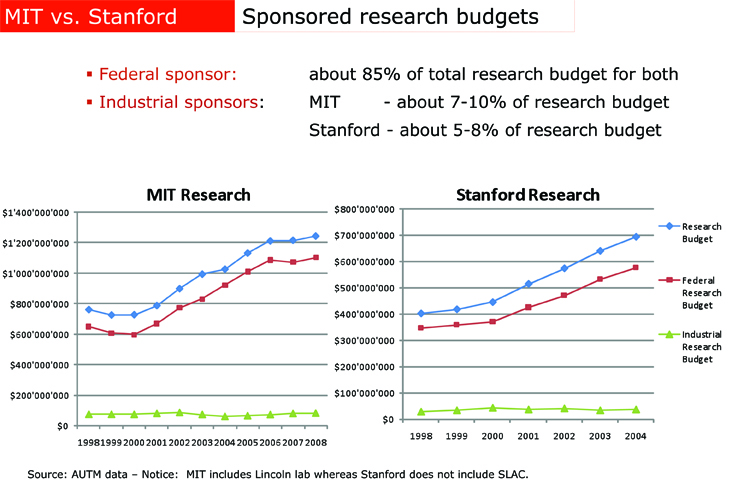 Figure 2: Federal and Industry funding of research at Stanford University and MIT.

Chapter 4 – The US entrepreneurial state.

In this short chapter, Mazzucato shows through four examples how the US government fostered innovation. These are DARPA (the funding of American research by the military), SBIR (The Small Business Innovation Research), Orphan Drugs and Nanotechnologies.

On Darpa, “A series of small offices, staffed with leading scientists, are given considerable budget autonomy, … funding a mix of university-based researchers, start-ups, established firms and consortia… helping firms to get products to the stage of commercial viability”. [Page 78 ] Again the impact of DARPA in funding research is a no brainer. And Yes, I should be said. Mazzucato is right about too much silence on the role of the State. Check as a great reference Rebecca’s Lowen “Creating the Cold War University – the Transformation of Stanford”.

I am less convinced about the SBIR. “Government agencies designate a fraction of their research funding to support small, independent, for-profit firms.” Mazzucato claims Apple was funded with such a fund, Continental Illinois Venture Corp. but I checked Apple IPO document and CIVC was not at the origin of the company. Arthur Rock and Don Valentine convinced Markkula to help the two Steve and invested in January 1979. Even if CIVC invested that early, it was a minority and passive shareholder. Furthermore, CIVC was the VC arm of a bank, so not a purely State investment… She also quotes Lerner and Audretsch, leading professors as references. In a recent book (Boulevard of Broken Dreams – Pages 125-126), the same Lerner explains that the lack of flexibility of SBIR and ATP was detrimental (it had to be pre-commercial funding for ATP; start-ups had to be 51% owned by US citizens or residents, to the point that the presence of venture capital could exclude the firm from SBIR funding!) I have been struggling for years to find the real impact of SBIR and could never find convincing data of an important role. State direct role in VC funding has been a recurrent debate with unclear answers for years.

I do not know about orphan drugs, but I am skeptical about nanotechnologies. “Nanotechnology is very likely to be the next general purpose technology”. [Page 83] “It will be even more important than the computer revolution.” “Today it does not yet create a major economic impact because of the lack of commercialization of new technologies, due to the excessive investments made in research relative to the lack of investments in commercialization. […] This raises a question: if government has to do the research, fund major infrastructure investments and also undertake the commercialization effort, what exactly is the role of the private sector?” [Page 86]

Well again many things are unclear and somehow contradictory in the arguments. If nanotechnology was just another low hanging fruit thanks to the State investment, we should have already seen early results. The US initiative on Nanotech was launched in 2000. There has been a very visible start-ups such as Nanosys or A123 to a lesser extent. Next is Nanosys cap. table as of 2004. One can read the then and additional funding from private sources.

I am now reading chapter 5 and will come back on Mazzucato’s book in a part 3! 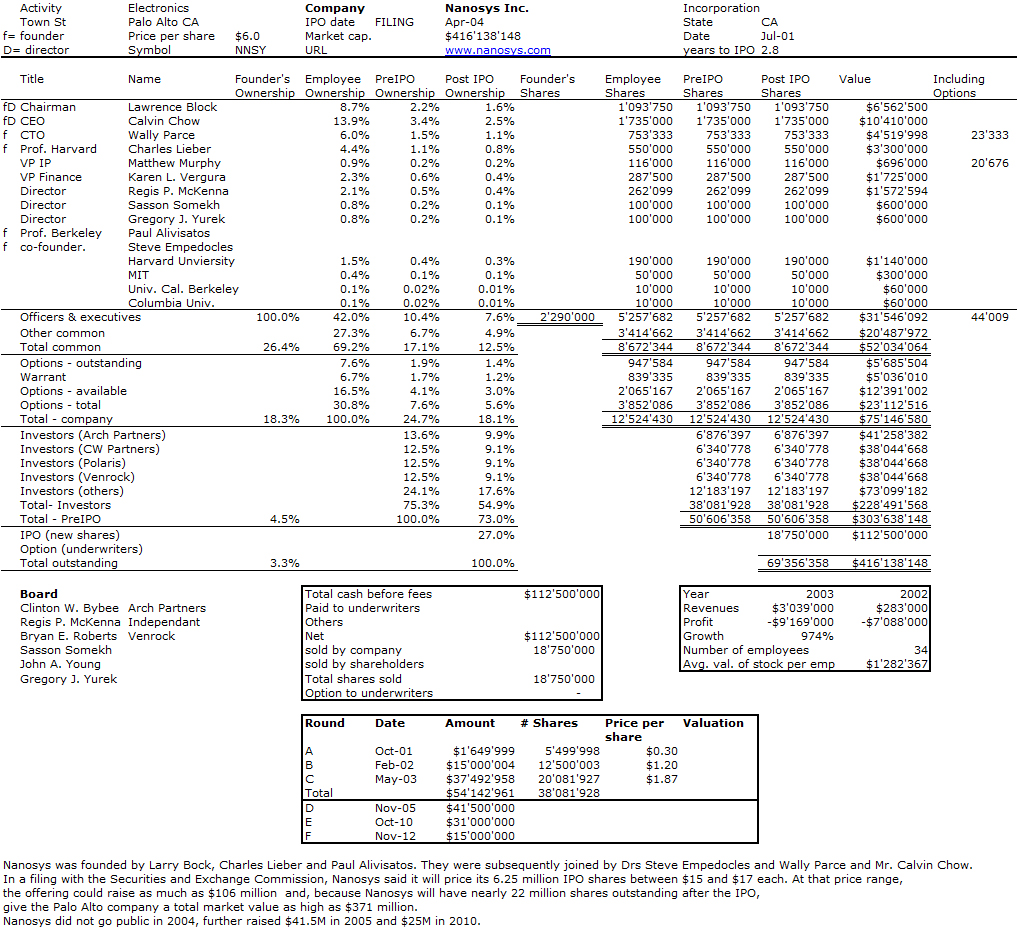