Indeed a brilliant and “crazy” conversation between Etienne Klein, the physicist, and Gerard Berry, Gold Medal of the CNRS for his work in computer science on France Culture’s Conversation Scientifique. They speak about so many beautiful “provocative” things. 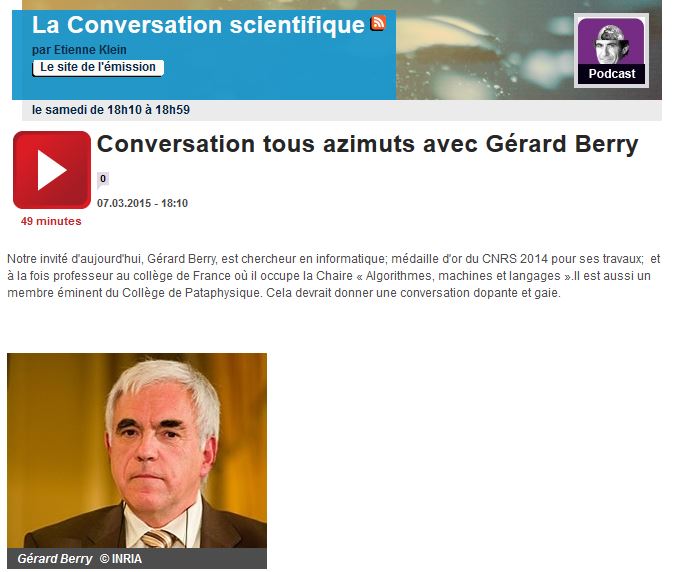 On the serious side Berry talks about the difficulty of predicting and the danger of impossible promises, also about the courage in science. Physics talks about energy, computer science about information and so do the new generations, Berry claims. Berry also speaks of the machine and the human. The digital machine, the computer goes very fast, but not with much more intelligence than a steam engine. Except the computer is everywhere. But we, humans, are intuitive, there is no insight in a computer. We are very complementary. Again, I do not agree with transhumanists who believe that the machine will overtake us – in the short term at least. Berry is very annoyed by the notion of intelligence in computers. The performance is not intelligence, but there are many interesting things in AI such as learning, find people in a photo database fascinates Berry.

On the politics of science, Berry expresses great caution and wisdom. “Claiming that a research topic will happen right away is the best way to kill it.” He was answering a question about the quantum computer. “This was the case of artificial intelligence”. There are people willing to promise the moon and more people willing to believe them. They promise sensational things in interesting topics. One must look into these areas, but one should make no promise. Among the possible benefits, but unpredictable, there will be some interesting things.

He also talks about neuroscience. He is fascinated by the way children learn, which is difficult to understand; why the brain freezes after a while. His fascination is that the brain processes information, but we do not understand creativity, the brain is a huge machine which we do not understand. But again, it will be difficult, no doubt very difficult to understand how the brain works. Berry believes “no more than that” in our ability to build artificial neurons to simulate the brain mechanisms. We also discover that pleasure and boredom, motivation are essential to learning. Finally Berry started a short analysis on the current state of research. “Do not do anything new when you want to be successful. Or rather you have to fight.” (just as in any art).