I am reading the remarkable Guns, Germs, and Steel: The Fates of Human Societies by Jared Diamond. 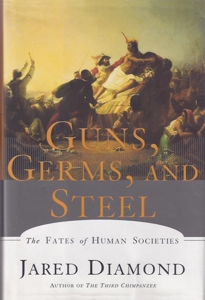 I did not think initially that I would have anything to extract from it related to entrepreneurship and innovation. And I was wrong. I just read a section about human inventions and innovations, which I liked very much. Here it is.

THF STARTING POINT for our discussion is the common view expressed in the saying “Necessity is the mother of invention.” That is, inventions supposedly arise when a society has an unfulfilled need: some technology is widely recognized to be unsatisfactory or limiting. Would-be inventors, motivated by the prospect of money or fame, perceive the need and try to meet it. Some inventor finally comes up with a solution superior to the existing, unsatisfactory technology. Society adopts the solution if it is compatible with the society’s values and other technologies.
Quite a few inventions do conform to this commonsense view of necessity as invention’s mother. In 1942, in the middle of World War II, the U.S. government set up the Manhattan Project with the explicit goal of inventing the technology required to build an atomic bomb before Nazi Germany could do so. That project succeeded in three years, at a cost of $2 billion (equivalent to over $20 billion today). Other instances are Eli Whitney’s 1794 invention of his cotton gin to replace laborious hand cleaning of cotton grown in the U.S. South, and James Watt’s 1769 invention of his steam engine to solve the problem of pumping water out of British coal mines.
These familiar examples deceive us into assuming that other major inventions were also responses to perceived needs. In fact, many or most inventions were developed by people driven by curiosity or by a love of tinkering, in the absence of any initial demand for the product they had in mind. Once a device had been invented, the inventor then had to find an application for it. Only after it had been in use for a considerable time did consumers come to feel that they “needed” it. Still other devices, invented to serve one purpose, eventually found most of their use for other, unanticipated purposes. It may come as a surprise to learn that these inventions in search of a use include most of the major technological breakthroughs of modern times, ranging from the airplane and automobile, through the internal combustion engine and electric light bulb, to the phonograph and transistor. Thus, invention is often the mother of necessity, rather than vice versa.
A good example is the history of Thomas Edison’s phonograph, the most original invention of the greatest inventor of modern times. When Edison built his first phonograph in 1877, he published an article proposing ten uses to which his invention might be put. They included preserving the last words of dying people, recording books for blind people to hear, announcing clock time, and teaching spelling. Reproduction of music was not high on Edison’s list of priorities. A few years later Edison told his assistant that his invention had no commercial value. Within another few years he changed his mind and did enter business to sell phonographs but for use as office dictating machines. When other entrepreneurs created jukeboxes by arranging for a phonograph to play popular music at the drop of a coin, Edison objected to this debasement, which apparently detracted from serious office use of his invention. Only after about 20 years did Edison reluctantly concede that the main use of his phonograph was to record and play music.
The motor vehicle is another invention whose uses seem obvious today. However, it was not invented in response to any demand. When Nikolaus Otto built his first gas engine, in 1866, horses had been supplying people’s land transportation needs for nearly 6,000 years, supplemented increasingly by steam-powered railroads for several decades. There was no crisis in the availability of horses, no dissatisfaction with railroads.
Because Otto’s engine was weak, heavy, and seven feet tall, it did not recommend itself over horses. Not until 1885 did engines improve to the point that Gottfried Daimler got around to installing one on a bicycle to create the first motorcycle; he waited until 1896 to build the first truck.
In 1905, motor vehicles were still expensive, unreliable toys for the rich. Public contentment with horses and railroads remained high until World War I, when the military concluded that it really did need trucks. Intensive postwar lobbying by truck manufacturers and armies finally convinced the public of its own needs and enabled trucks to begin to supplant horse-drawn wagons in industrialized countries. Even in the largest American cities, the changeover took 50 years.
Inventors often have to persist at their tinkering for a long time in the absence of public demand, because early models perform too poorly to be useful. The first cameras, typewriters, and television sets were as awful as Otto’s seven-foot-tall gas engine. That makes it difficult for an inventor to foresee whether his or her awful prototype might eventually find a use and thus warrant more time and expense to develop it. Each year, the United States issues about 70,000 patents, only a few of which ultimately reach the stage of commercial production. For each great invention that ultimately found a use, there are countless others that did not. Even inventions that meet the need for which they were initially designed may later prove more valuable at meeting unforeseen needs. While James Watt designed his steam engine to pump water from mines, it soon was supplying power to cotton mills, then (with much greater profit) propelling locomotives and boats.

THUS, THE COMMONSENSE view of invention that served as our starting point reverses the usual roles of invention and need. It also overstates the importance of rare geniuses, such as Watt and Edison. That “heroic theory of invention,” as it is termed, is encouraged by patent law, because an applicant for a patent must prove the novelty of the invention submitted. Inventors thereby have a financial incentive to denigrate or ignore previous work. From a patent lawyer’s perspective, the ideal invention is one that arises without any precursors, Like Athene springing fully formed from the forehead of Zeus.
ln reality, even for the most famous and apparently decisive modern inventions, neglected precursors lurked behind the bald claim “X invented Y.” For instance, we are regularly told, “James Watt invented the steam engine in 1769,” supposedly inspired by watching steam rise from a teakettle’s spout. Unfortunately for this splendid fiction, Watt actually got the idea for his particular steam engine while repairing a model of Thomas Newcomen’s steam engine, which Newcomen had invented 57 years earlier and of which over a hundred had been manufactured in England by the time of Watt’s repair work. Newcomen’s engine, in turn, followed the steam engine that the Englishman Thomas Savery patented in 1698, which followed the steam engine that the Frenchman Denis Papin designed (but did not build) around 1680, which in turn had precursors in the ideas of the Dutch scientist Christiaan Huygens and others. All this is not to deny that Watt greatly improved Newcomen’s engine (by incorporating a separate steam condenser and a double-acting cylinder), just as Newcomen had greatly improved Savery’s.
Similar histories can be related for all modern inventions that are adequately documented. The hero customarily credited with the invention followed previous inventors who had had similar aims and had already produced designs, working models, or (as in the case of the Newcomen steam engine) commercially successful models. Edison’s famous “invention” of the incandescent light bulb on the night of October 21, 1879, improved on many other incandescent light bulbs patented by other inventors between 1841 and 1878. Similarly, the Wright brothers’ manned powered airplane was preceded by the manned unpowered gliders of Otto Lilienthal and the unmanned powered airplane of Samuel Langley; Samuel Morse’s telegraph was preceded by those of Joseph Henry, William Cooke, and Charles Wheatstone; and Eli Whitney’s gin for cleaning short-staple (inland) cotton extended gins that had been cleaning long-staple (Sea Island) cotton for thousands of years.
All this is not to deny that Watt, Edison, the Wright brothers, Morse, and Whitney made big improvements and thereby increased or inaugurated commercial success. The form of the invention eventually adopted might have been somewhat different without the recognized inventor’s contribution. But the question for our purposes is whether the broad pattern of world history would have been altered significantly if some genius inventor had not been born at a particular place and time. The answer is clear: there has never been any such person. All recognized famous inventors had capable predecessors and successors and made their improvements at a time when society was capable of using their product. As we shall see, the tragedy of the hero who perfected the stamps used for the Phaistos disk was that he or she devised something that the society of the time could not exploit on a large scale.
[Pages 242-245]