How many times will I say how great a book is Walter Isaacson’s The Innovators – How a Group of Hackers, Geniuses, and Geeks Created the Digital Revolution ? And how many posts will I write about it ? Now this this the 4th part ! Isaacson shows how collaboration in software contributed to a unique value creation. This may mean sharing but also stealing !

Gates complained to the members of the Homebrew Computer Club about this: “Two surprising things are apparent, however, 1) Most of these “users” never bought BASIC (less than 10% of all Altair owners have bought BASIC), and 2) The amount of royalties we have received from sales to hobbyists makes the time spent on Altair BASIC worth less than $2 an hour. Why is this? As the majority of hobbyists must be aware, most of you steal your software. Hardware must be paid for, but software is something to share. Who cares if the people who worked on it get paid? Is this fair? One thing you don’t do by stealing software is get back at MITS for some problem you may have had. MITS doesn’t make money selling software. […] The thing you do is theft. I would appreciate anyone who wants to pay.” [Page 342 and http://www.digibarn.com/collections/newsletters/homebrew/V2_01/gatesletter.html] 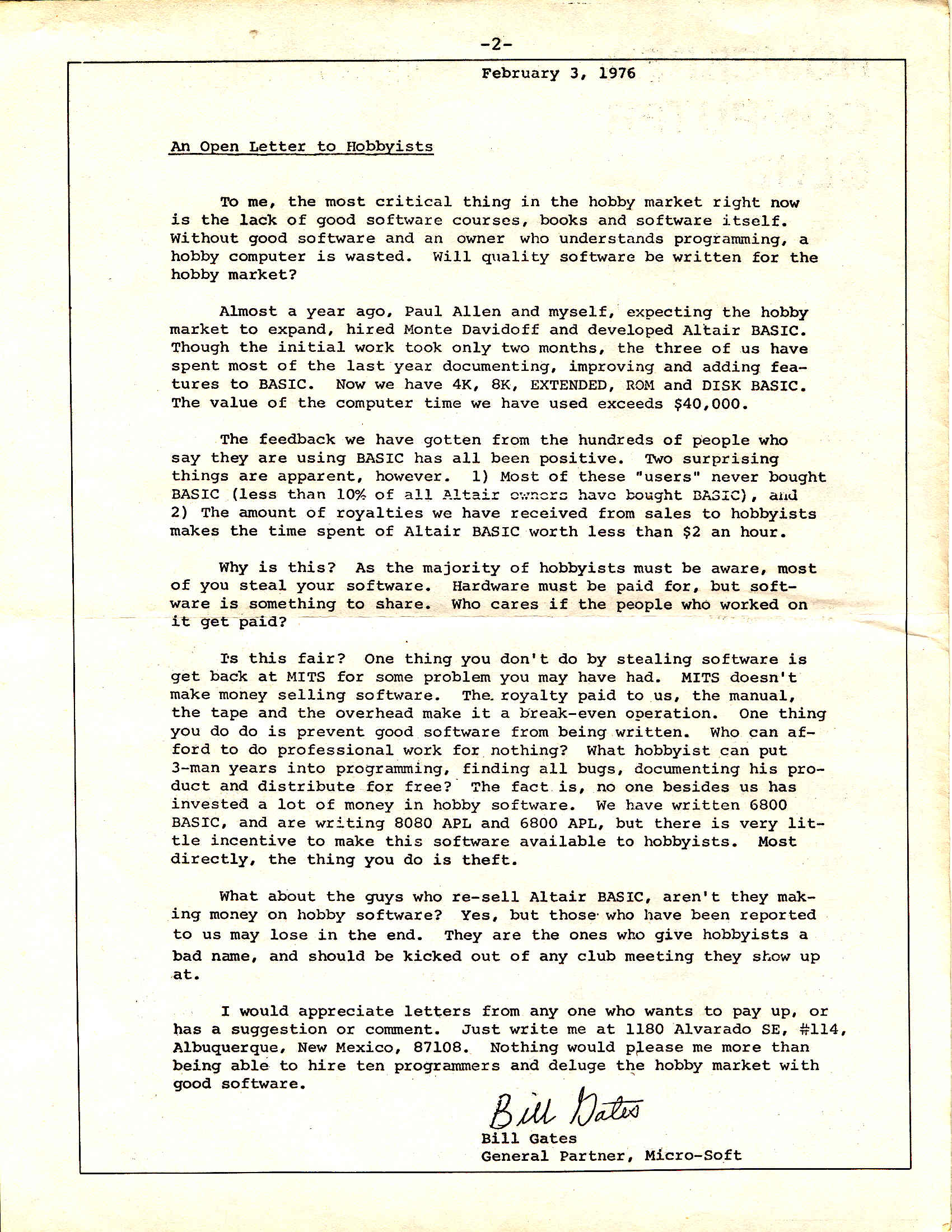 But Isaacson nuances : “Still there was a certain audacity to the letter. Gates was, after all, a serial stealer of computer time, and he had manipulated passwords to hack into accounts from eighth grade through his sophomore year at Harvard. Indeed, when he claimed in his letter that he and Allen had used more than $40,000 worth of computer time to make BASIC, he omitted the fact he had never actually paid for that time. […] Also, though Gates did not appreciate it at the time, the widespread pirating of Microsoft BASIC helped his fledgling company in the long run. By spending so fast, Microsoft BASIC became a standard, and other computer makers had to license it.” [Page 343]

And what about Jobs and Wozniak? Everyone knows about how phone phreaks had created a device that emitted just the right tone chirps to fool the Bell System and cadge free long-distance calls. […] “I have never designed a circuit I was prouder of. I still think it was incredible”. They tested it by calling the Vatican, with Wozniak pretending to be Henry Kissinger needing to speak to the pope, it took a while but the officials at the Vatican finally realized it was a prank before they woke up the pontiff. [Page 346]

Gates, Jobs and the GUI

And the greatest robbery may have been the GUI – Graphical User Interface. But who stole? Later when he was challenged about pilfering Xerox’s ideas, Jobs quoted Picasso: “Good artists copy, great artists steal. And we have been always shameless about stealing great ideas. They were copier-heads who had no clue about what a computer could do.” [Page 365]

However when Microsoft copied Apple for Windows, it was a different story… “In the early 1980s, before the introduction of the Macintosh, Microsoft had a good relationship with Apple. In fact on the day that IBM launched its PC in August 1981, Gates was visiting Jobs at Apple, which was a regular occurrence since Microsoft was making most of its revenue writing software for the Apple II. Gates was still the supplicant in the relationship. In 1981, Apple had $334 million in revenue, compared to Microsoft’s $15 million. […] Jobs had one major worry about Microsoft: he didn’t want it to copy the graphical user interface. […] His fear that Gates would steal the idea was somewhat ironic, since Jobs himself had filched the concept from Xerox.” [Pages 366-67]

Things would go worse… “Well, Steve, I think there’s more than one way of looking at it. I think it’s more like we both had this rich neighbor named Xerox and I broke into his house to steal the TV set and I found out that you had already stolen it”. [Page 368]

There would be other oppositions. The hacker corps that grew up around GNU [Stallman’s free software] and Linux [Torvalds’ open software] showed that emotional incentives, beyond financial rewards, can motivate voluntary collaboration. “Money is not the greatest of motivations,” Torvalds said. “Folks do their best work when they are driven by passion. When they are having fun. This is as true for playwrights and sculptors and entrepreneurs as it is for software engineers.” There is also, intended or not, some self-interest involved. “Hackers are also motivated, in large part, by the esteem they can gain in the eyes of their peers, improve their reputation, elevate their social status. Open source development gives programmers the chance.” Gates “Letter to Hobbysts”, complaining about the unauthorized sharing of Microsoft BASIC, asked in a chiding way, “who can afford to do professional work for nothing?”. Torvalds found that an odd outlook. He and Gates were from two very different cultures, the communist-tinged radical academia of Helsinki versus the corporate elite of Seattle. Gates may have ended up with the bigger house, but Torvalds reaped anti-establishment adulation. “Journalists seemed to love the fact that, while Gates lived a high-tech lakeside mansion, I was tripping over my daughter’s playthings in a three-bedroom ranch house with bad plumbing in boring Santa Clara,” he said with ironic self-awareness. “And that I drove a boring Pontiac. And answered my own phone. Who wouldn’t love me?” [Pages 378-79]

Which does not make open a friend of free. The disputes went beyond mere substance and became, in some ways, ideological. Stallman was possessed by a moral clarity and unyielding aura, and he lamented that “anyone encouraging idealism today faces a great obstacle: the prevailing ideology encourages people to dismiss idealism as ‘impractical'”. Torvalds, on the contrary, was unabashedly practical, like an engineer. “I led the pragmatists,” he said. “I have always thought that idealistic people are interesting, but kind of boring and scary.” “Torvalds admitted to “not exactly being a huge fan” of Stallman, explaining, “I don’t like single-issue people, nor do I think that people who turn the world into black and white are very nice or ultimately very useful. The fact is, there aren’t just two sides to any issue, there’s almost always a range of responses, and ‘it depends’ is almost always the right answer to any big question. He also believed it should be permissible to make money from open-source software. “Open-source is about letting everybody play. Why should business, which fuels so much of society’s technological advancement, be excluded?”. Software may want to be free, but the people who write it may want to feed their kids and reward their investors. [Page 380]