Innovation is about business models – the Atari case

Innovation in (Silicon) Valley: after the chip, innovation saw the arrival of games, software and the Internet “As they were working on the first Computer Space consoles, Bushnell heard that he had competition. A Stanford grad named Bill Pitts and his buddy Hugh Tuck from California polytechnic had become addicted to Spacewar, and they decided to use a PDP-11 minicomputer to turn it into an arcade game. […] Bushnell was contemptuous of their plan to spend $20,000 on equipment, including a PDP-11 that would be in another room and connected by yards of cable to the console, and then charge ten cents a game. “I was surprised at how clueless they were about the business model,” he said. “Surprised and relieved. As soon as I saw what they were doing, I knew they’d be no competition”.
Galaxy Game by Pitts and Tuck debuted at Stanford’s Tresidder student union coffeehouse in the fall of 1971. Students gathered around each night like cultists in front of a shrine. But no matter how many lined up their coins to play, there was no way the machine could pay for itself, and the venture eventually folded. “Hugh and I were both engineers and we didn’t pay attention to business issues at all,” conceded Pitts. Innovation can be sparked by engineering talent, but it must be combined with business skills to set the world afire.
Bushnell was able to produce his game, Computer Space, for only $1,000. It made its debut a few weeks after Galaxy Game at the Dutch Goose bar in Menlo Park near Palo Alto and went on to sell a respectful 1,500 unites. Bushnell was the consummate entrepreneur: inventive, good at engineering, and savvy about business and consumer demand. He was also a great salesman. […] When he arrived back at Atari’s little rented office in Santa Clara, he described the game to Alcorn [Atari’s co-founder], sketched out some circuits, and asked him to build the arcade version of it. He told Acorn he had signed a contract with GE to make the game, which was untrue. Like many entrepreneurs, Bushnell had no shame about distorting reality in order to motivate people.” [Pages 209-211]

“Innovation requires having three things: a great idea, the engineering talent to execute it, and the business savvy (plus deal-making moxie) to turn it into a successful product. Nolan Bushnell scored a trifecta when he was twenty-nine, which is why he, rather than Bill Pitts, Hugh Truck, Bill Nutting, or Ralph Baer, goes down in history as the innovator who launched the video game industry.” [page 215]

You may also so listen to Bushnell directly. This is Something Ventured and the Atari story begins at 30’07” until 36’35” (you may go on Youtube directly for the right timing).

The debate about intelligence of machines

Chapter 7 is about the beginnings of the Internet. Isaacson adddresses a topic which has come back has a hot debate these days: will machines and the computer in particular replace humans, with or despite their intelligence, creativity and innovation capabilities? I feel close to Isaacson whom I quote from page 226: “Licklider sided with Norbert Wiener, whose theory of cybernetics was based on humans and machines working closely together, rather than with their MIT colleagues Marvin Minsky and John mcCarthy, whose quest for artificial intelligence involved creating machines that could learn on their own and replace human cognition. As Licklider explained, the sensible goal was to create an environment in which humans and machines “cooperate in making decisions.” In other words,they would augment each other. “Men will set the goals, formulate the hypotheses, determine the criteria, and perform the evaluations. Computing machines will do the routinizable work that must be done to prepare the way for insights and decisions in technical and scientific thinking.”

In the same chapter which tries to describe who were the inventors (more than the innovators) in the case of the Internet – J.C.R. Licklider, Bob Taylor, Larry Roberts, Paul Baran, Donald Davies, or even Leonard Kleinrock – and why it was invented – an unclear motivation between the military objective of protecting communications in case of a nuclear attack or the civilian one of helping researchers in sharing resources – Isaacson shows once again the challenge of convincing established players.

Baran then collided with one of the realities of innovation, which was that entrenched bureaucracies are resistant to change. […] He tried to convince AT&T to supplement its circuit-switched voice network with a packet-switched data network. “they fought it tooth and nail,” he recalled. “They tried all sorts of things to stop it.” [AT&T would go as far as organizing a series of seminars that would involve 94 speakers] “Now do you see why packet switching wouldn’t work?” Baran simply replied, “No”. Once again, AT&T was stymied by the innovator’s dilemma. It balked at considering a whole new type of data network because it was so invested in traditional circuits. [Pages 240-41]

[Davies] came up with a good old English word for them: packets. In trying to convince the general Post office to adopt the system, Davies ran into the same problem that Baran had knocking at the door of AT&T. But they both found a fan in Washington. Larry Roberts not only embraced their ideas; he also adopted the word packet.

The entrepreneur is a rebel (who loves power)

One hard-core hacker, Steve Dompier, told of going down to Alburquerque in person to pry loose a machine from MITS, which was having trouble fulfilling orders. By the time of the third Homebrew meeting in April 1975, he had made an amusing discovery. He had written a program to sort numbers, and while he was running it, he was listening to a weather broadcast on a low-frequency transistor radio. “The radio started going zip-zzziiip-ZZZIIIPP at different pitches », and Dompier said to himself, “Well, what do you know ! My first peripheral device!” So he experimented. “I tried some other programs to see what they sounded like, and after about eight hours of messing around, I had a program that could produce musical tones and actually make music”. [Page 310]

“Dompier published his musical program in the next issue of the People’s Computer Company, which led to a historically noteworthy response from a mystified reader. “Steven Dompier has an article about the musical program that he wrote for the Altair in the People’s Computer Company,” Bill Gates, a Harvard student on leave writing software for MITS in Albuquerque, wrote in the Altair newsletter. “The article gives a listing of his program and the musical data for ‘The Fool on the Hill’ and ‘Daisy.’ He doesn’t explain why it works and I don’t see why. Does anyone know?” the simple answer was that the computer , as it ran the programs, produced frequency interference that could be controlled by the timing loops and picked up as tone pulses by an AM radio.
By the time his query was published, Gates had been thrown into a more fundamental dispute with the Homebrew Computer Club. It became archetypal of the clash between the commercial ethic that believed in keeping information proprietary, represented by Gates [and Jobs], and the hacker ethic of sharing information freely, represented by the Homebrew crowd [and Wozniak].” [Page 311]

Isaacson, through his description of Gates and Jobs, explains what is an entrepreneur.

“Yes, Mom, I’m thinking,” he replied. “Have you ever tried thinking?” [P.314] Gates was a serial obsessor. […] he had a confrontational style [… and he] would escalate the insult to be “the stupidest thing I’ve ever heard.” [P.317] Gates pulled a power play that would define his future relationship with Allen. As Gates describes it, “That’s when I say ‘Okay, but I’m going to be in charge. And I’ll get used to being in charge, and it’ll be hard to deal with me from now on unless I’m in charge. If you put me in charge, I’m in charge of this and anything else we do.’ ” [P.323] Like many innovators, Gates was rebellious just for the hell of it. [P.331] “An innovator is probably a fanatic, somebody who loves what they do, works day and night, may ignore normal things to some degree and therefore be viewed as a bit imbalanced. […] Gates was also a rebel with little respect for authority, another trait of innovators. [P.338]

Allen assumed that his partnership with Gates would be fifty-fifty. […] but Gates had insisted on being in charge. “It’s not right for you to get half. […] I think it should be sixty-forty.” […] Worse yet, Gates insisted on revisiting the split two years later. “I deserve more than 60 percent.” His new demand was that the split be 64-36. Born with a risk-taking gene, Gates would cut loose late at night by driving at terrifying speeds up the mountain roads. “I decided it was his way of letting off steam.” Allen said. [P.339] 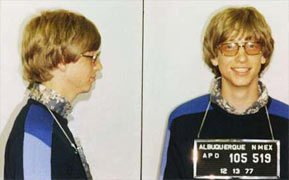 “There is something indefinable in an entrepreneur, and I saw that in Steve,“ Bushnell recalled. “He was interested not just in engineering, but also in the business aspects. I taught him that if you act like you can do something, then it will work. I told him, pretend to be completely in control and people will assume that you are.” [P.348]

The concept of the entrepreneur as a rebel is not new. In 2004, Pitch Johnson, one of the earliest VC in Silicon Valley claimed “Entrepreneurs are the revolutionaries of our time.” Freeman Dyson has written “The Scientist as a Rebel“. And you should read Nicolas Colin’s analysis of entrepreneurial ecosystems: Capital + know-how + rebellion = entrepreneurial economy. Yes rebels who loves power…