Another must read about the crisis of our times. Following Piketty or others, or lesser known analysis of Small-Town America of living anywhere vs. somewhere, here is J. D. Vance’s “great insight into Trump and Brexit”. 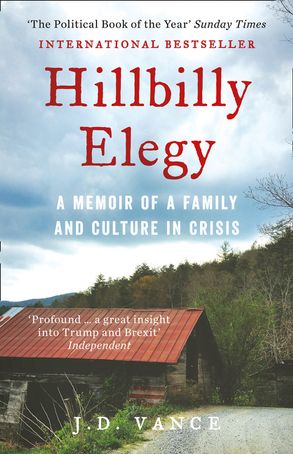 If ethnicity is one side of the coin, then geography is the other. [Page 3]

It is unsurprising, then, that we’re a pessimistic bunch. What is more surprising is that, as surveys have found, working-class whites are the most pessimistic group in America. More pessimistic than Latino immigrants, many of whom suffer unthinkable poverty. More pessimistic than black Americans, whose material prospects continue to lag behind those of whites. While reality permits some degree of cynicism, that fact that hillbillies like me are more down about the future than many other groups – some of whom are clearly mode destitute than we are – suggests that something else is going on. [Page 4]

The scale of migration was staggering. In the 1950s, thirteen of every one hundred Kentucky residents migrated out of state. Some areas saw even greater migration: Harlan county, for example, which was brought to fame in an Academy Award-winning documentary about coal strikes, lost 30 percent of its population to migration. In 1960, of Ohios’s ten million residents, one million were born in Kentucky, West Virginia, or Tennessee. This doesn’t count the large number of migrants from elsewhere in the southern Appalachian Mountains; nor does it include the children or grandchildren of migrants who were hill people to the core. [Page 28]

Mamaw’s family participated in the migratory flow with gusto. Of her seven siblings, Pet, Paul, and Gary moved to Indiana and worked in construction. Each owned a successful business and earned considerable we lath in the process. Rose, Betty, Teaberry, and David stayed behind. All of them struggled financially, though everyone but David managed a life of relative comfort by the standards of their community. [Page 29]