I had not contributed to Entreprise Romande for a while, which might be the reason of my somehow tiredness about the never ending flow of (virtual?) innovations. Here is my translation of my latest contribution… 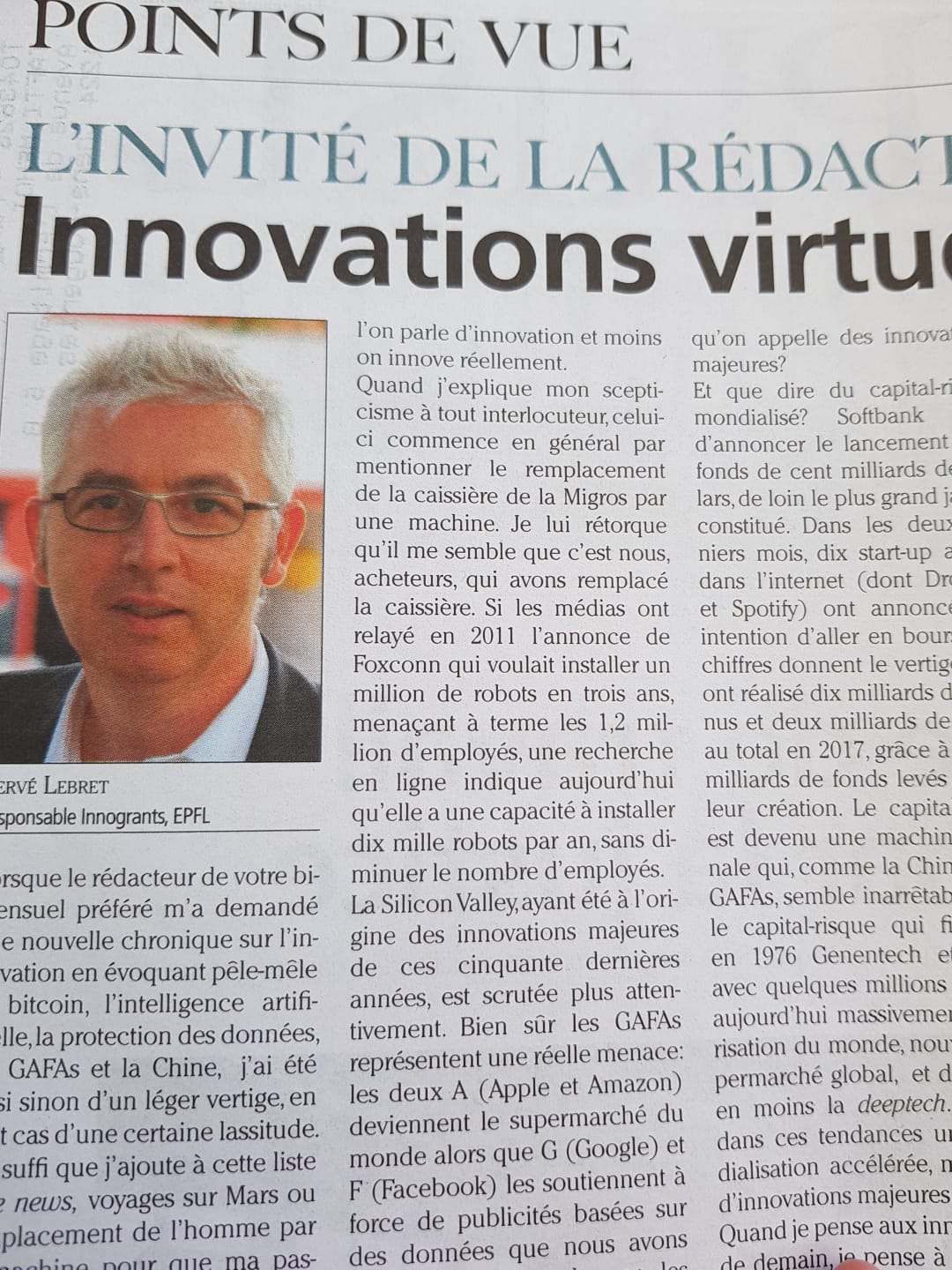 When the editor of your favorite magazine asked me for a new contribution about innovation, offering me to write about bitcoin, artificial intelligence, data protection, GAFAs or China, I was the victim if not of a slight dizziness, at least of a certain weariness. I just had to add to this list Fake news, Trips to Mars or Replacement of Humans by Machines and my ongoing passion for startups and technological innovation turned into a light nightmare. It seems to me that the more we talk about innovation and the less we really innovate.

When I explain my slight skepticism to anybody, they usually start with the mention of replacing the cashier of the Migros (a “famous” chain of Swiss supermarkets) with a machine. I reply that it seems to me that we, buyers, have replaced the cashier. If the media relayed in 2011 Foxconn’s announcement that it wanted to install a million robots in 3 years, threatening the 1.2 million employees, an online search indicates today that it has a ability to install 10,000 robots a year, and still the same number of employees.

Silicon Valley, having been at the origin of the major innovations of the last fifty years, is scrutinized more attentively. Of course the GAFAs represent a real threat: the two A become the supermarket of the world while the G and F support them by advertisements based on data that we have kindly given them, putting them in a quasi-monopoly situation. But you read well, supermarket, advertising. And that is what is called major innovations?

And what about globalized venture capital? Softbank has announced the launch of a 100 billion fund, by far the largest ever. In the last two months, 10 internet startups (including Dropbox and Spotify) have announced their intention to go public. The figures are dizzying: they generated 10 billion in revenues and 2 billion losses in 2017, thanks to 4 billion of funds raised since their creation. Venture capital has become an infernal machine that, like China and the GAFAs, seems unstoppable. But the venture capital that financed in 1976 Genentech and Apple with a few millions today massively funds the “uberisation” of the world, new global supermarket, and less and less the “deeptech”. I see in these trends an accelerated globalization but few major innovations.

When I think of the innovations of tomorrow, I think of nuclear fusion that will solve our energy problems, research on AIDS or cancer that will rid us of these disasters as we have been able to get rid of previous diseases, I think of disruptive solutions for water, food, mobility. Tom Perkins, Silicon Valley’s big venture capitalist, thought that the innovations of our time were based on three major inventions, the steam engine, the electricity and especially the transistor that made possible all the technologies that seem to threaten us today. But where is the next invention? I recognize myself in Peter Thiel’s phrase: “We wanted flying cars; instead, we had 140 characters. ”

Do not get me wrong, the innovation flow was exceptional in the 20th century and developments continue. In biotechnology, the Crispr-CAS9 technology [1] is as promising as the genetic revolution of the 1970s. Three startups, Crispr Therapeutics, Intellia Therapeutics and Editas Medicine went public in 2016 and promise to cure 10,000 diseases. But today these three companies represent less than $70 million in revenue and more than 200 million in losses in 2017. We do not yet have gene therapy or personalized medicine. Google’s Alphago beat the best go player, but nasty voices ​​say that it’s only the largest computing power and the largest data storage of computers that has allowed such performance, and no particular invention or intelligence . In more complex contexts, the machine is not able to compete with humans. And what will really bring us the multiplication of Big Data? But the promises of some to politicians and others to their shareholders, amplified by the media, are sometimes an insult to intelligence: why parasitize the human spirit with promises of (virtual) innovations sometimes more “abracadabrantesque” one than the others and ultimately disappointing when the real world is sufficiently complex and exciting?