I read again today about the importance of the lean startup movement. I have never been a big fan. Of course you need to interact with customers (at least to sell something) but you should not become a slave of your customers and pivot as soon as you can not get validation from them.

Do not get me wrong, I am a big fan of Steve Blank and customer development, I use his work a lot. But there is so much uncertainty, the tool should not replace the vision and intuition of the entrepreneur. Let me quote again Horowitz for example: “Figuring out the right product is the innovator’s job, not the customer’s job. The customer only knows what she thinks she wants based on her experience with the current product. The innovator can take into account everything that’s possible, but often must go against what she knows to be true. As a result, innovation requires a combination of knowledge, skill, and courage. Sometimes only the founder has the courage to ignore the data.”

It reminded me I had read something about this from Peter Thiel. I found it again in a 2014 post: Should entrepreneurs have start-up skills? Two counterintuitive answers. Here is what Thiel had said: “What do I think about lean startups and iterative thinking where you get feedback from people versus complexity that may not work. I’m personally quite skeptical of all the lean startup methodology. I think the really great companies did something that was somewhat more of a quantum improvement that really differentiated them from everybody else. They typically did not do massive customer surveys, the people who ran these companies sometimes, not always, suffered from mild forms of Aspergers, so they were not actually that influenced, not that easily deterred, by what other people told them to do. I do think we’re way too focused on iteration as a modality and not enough on trying to have a virtual ESP link with the public and figuring it out ourselves.”

And this morning I found another 2015 contribution to the debate which is worth reading: Peter Thiel is right about Lean Startup. 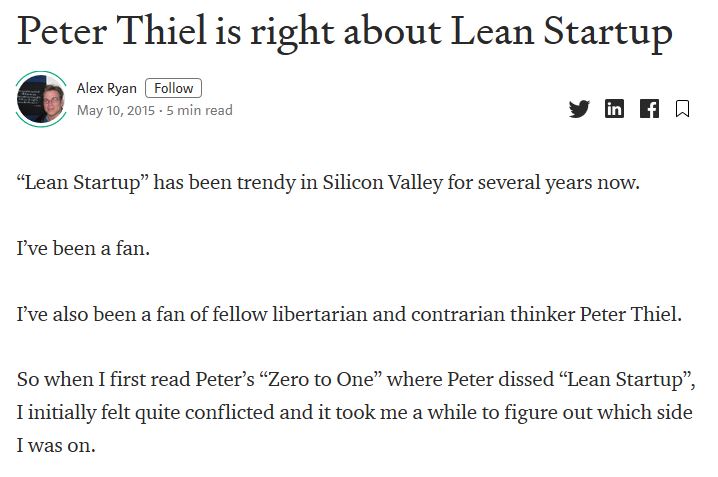 In a nutshell, “Lean Startup is best used as a teaching tool for those who need a little help in learning how to use their mirror neurons to feel the real needs of the real people they are seeking to serve. It can help to reduce waste. It can help to slow the rate of decline of organizations that are being disrupted.”

1 thought on “The lean startup – my skepticism”