A colleague of mine (thanks Agnès!) informed me that the United Kingdom made public its data about startups. This is just amazing!

So I checked about Revolut and found all the data I could dream of. Founders, rounds of funding, shareholders.

Two young founders from Eastern Europe origin, 29 and 30-year old at the time of founding. 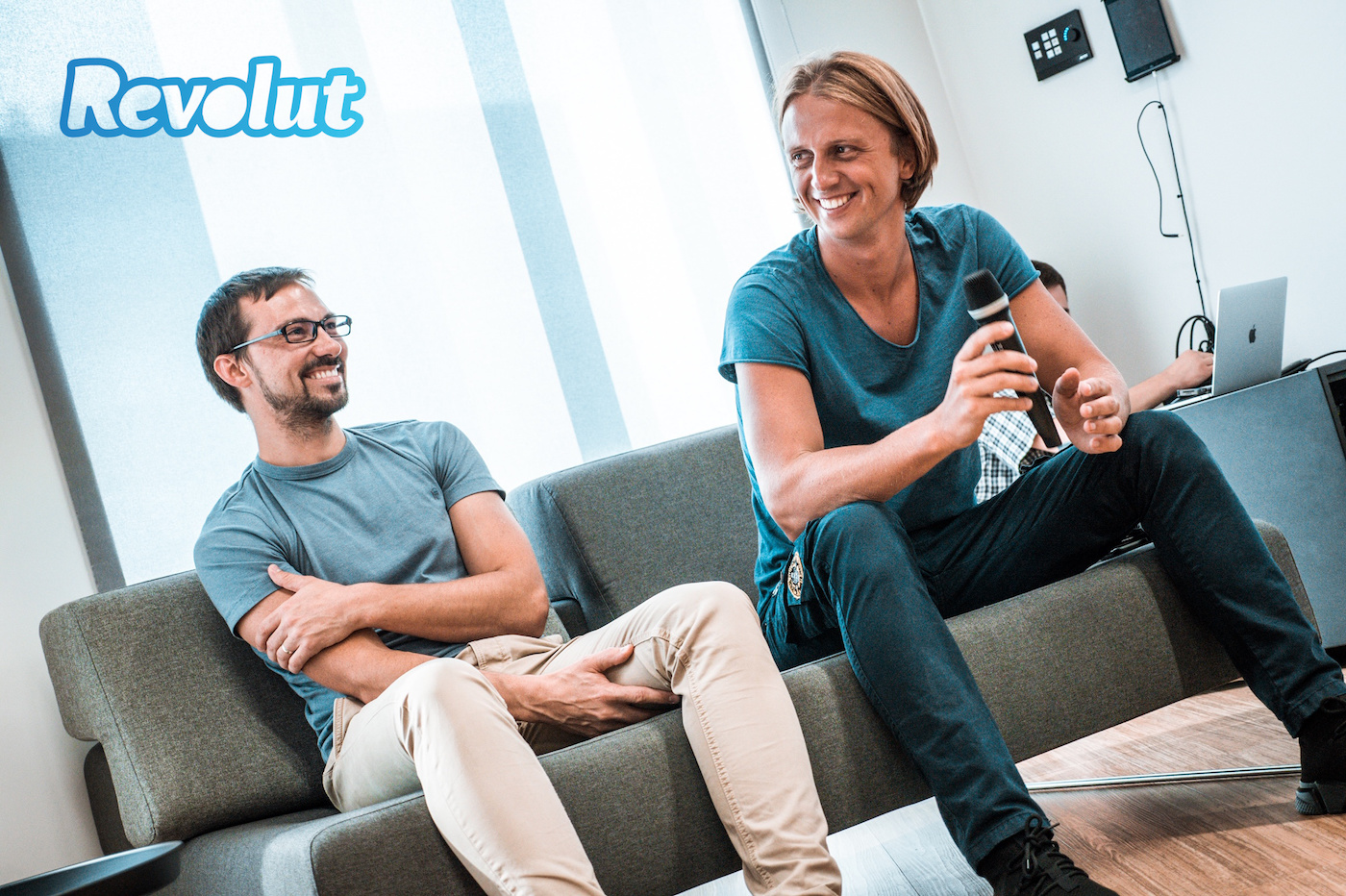 Some big, somewhat strange, rounds and here is today’s cap table. However series E is a best guest whereas previous rounds were publicly availale. 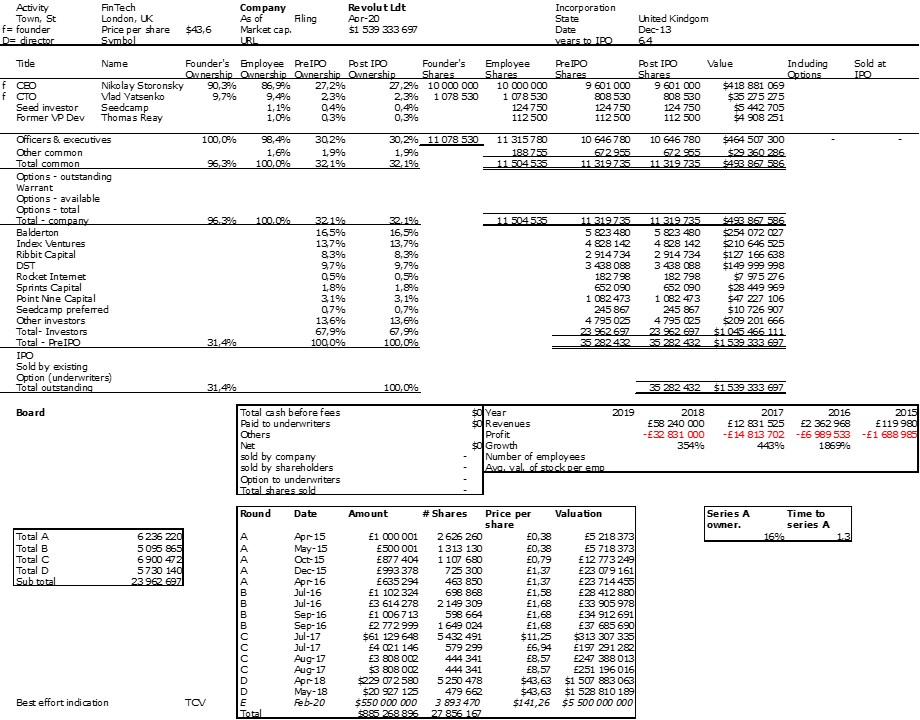 This morning (April 13), I discovered an important inaccuracy, nothing wrong but still: what about the ESOP, the stock-options. They are mentioned in the company documents, so here is a modified cap. table, and see the difference! I must add this is the ESOP in Dec. 2018, so the number is probably bigger today. 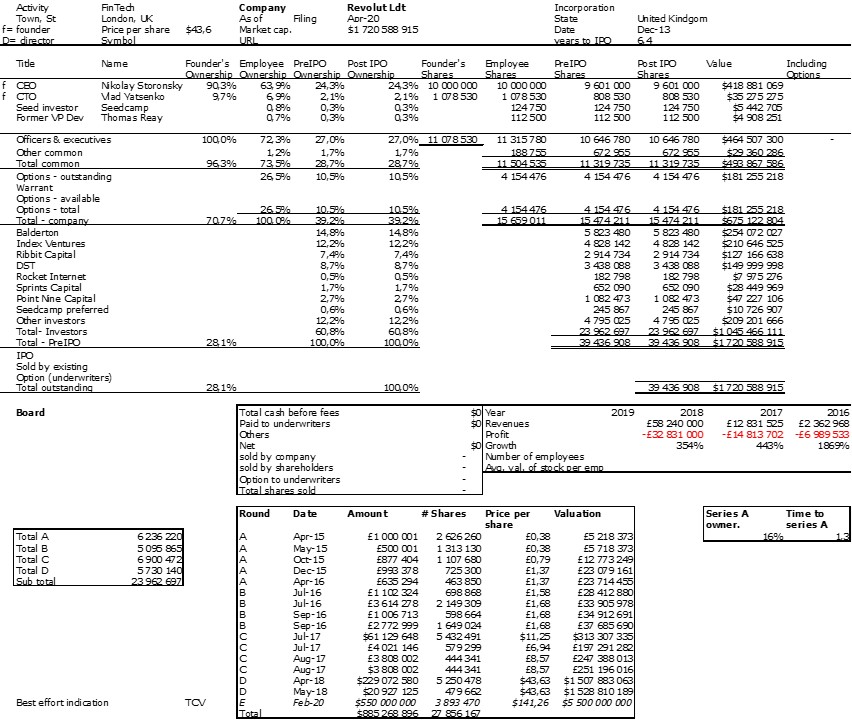 Criteo is the latest European story. Not yet, some may say, but its numbers are impressive. How do I know? Well in France the Register of Commerce provides a lot of data if you are prepared to pay a small fee (about €10 per document you download). It is possible to know about the rounds of financing, about the revenues, about the founders. It was not as easy as I imagined and maybe I should have bought more documents. (The revenues are not what I had read, stockholders’ shares is probably not accurate as things may be missing. But it looks good enough to me.)

So I publish here again, one of my favorite tools, the capitalization table of Criteo with its rounds of financing (€47M raised), its revenues (at least €74M in 2011), its investors and its founders. But the wealth is virtual, it corresponds to a €15 price per share, more than 3 times the price paid by the series D investors…

I do not think Criteo’s journey was easy and simple. When I first heard of the company, it was developing recommendation systems, not ‘personalized retargeting’. It had Plan B related Pivot. So here it is and my apologies for inaccuracies / frustrations. 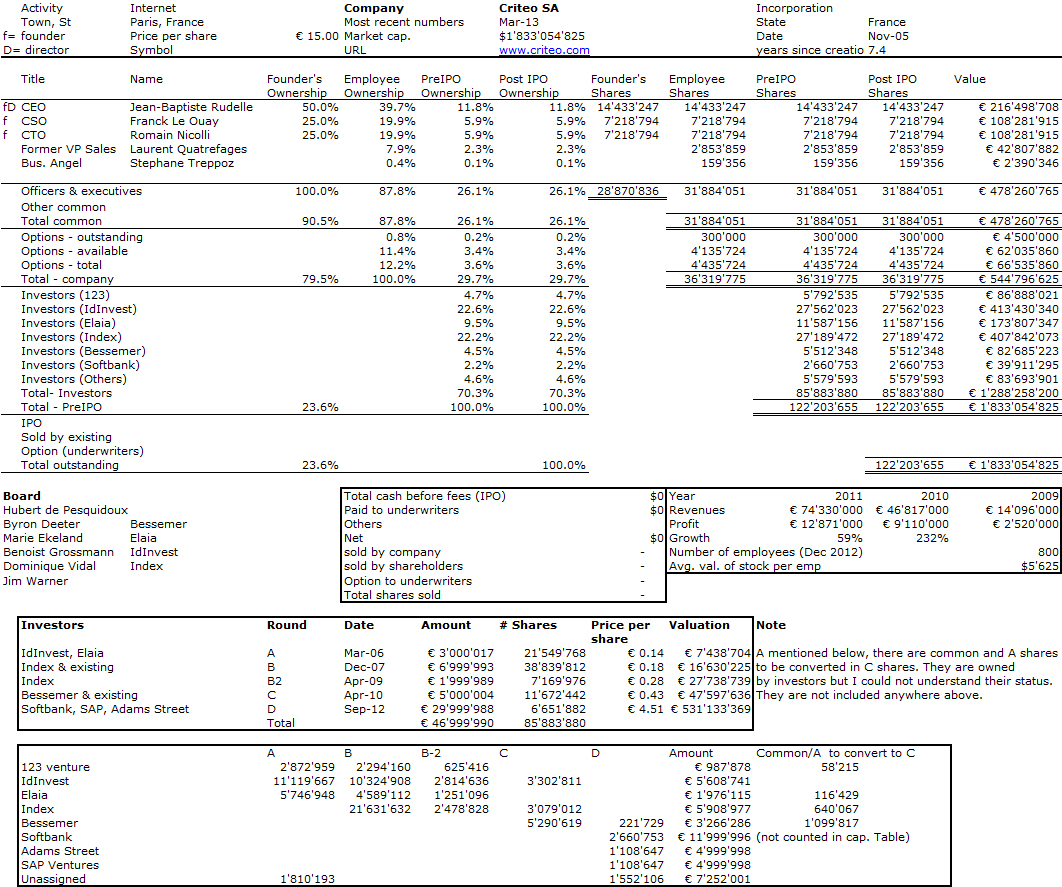 This last article mentions the IPO of Marin, which I had followed too. The comparison is interesting… 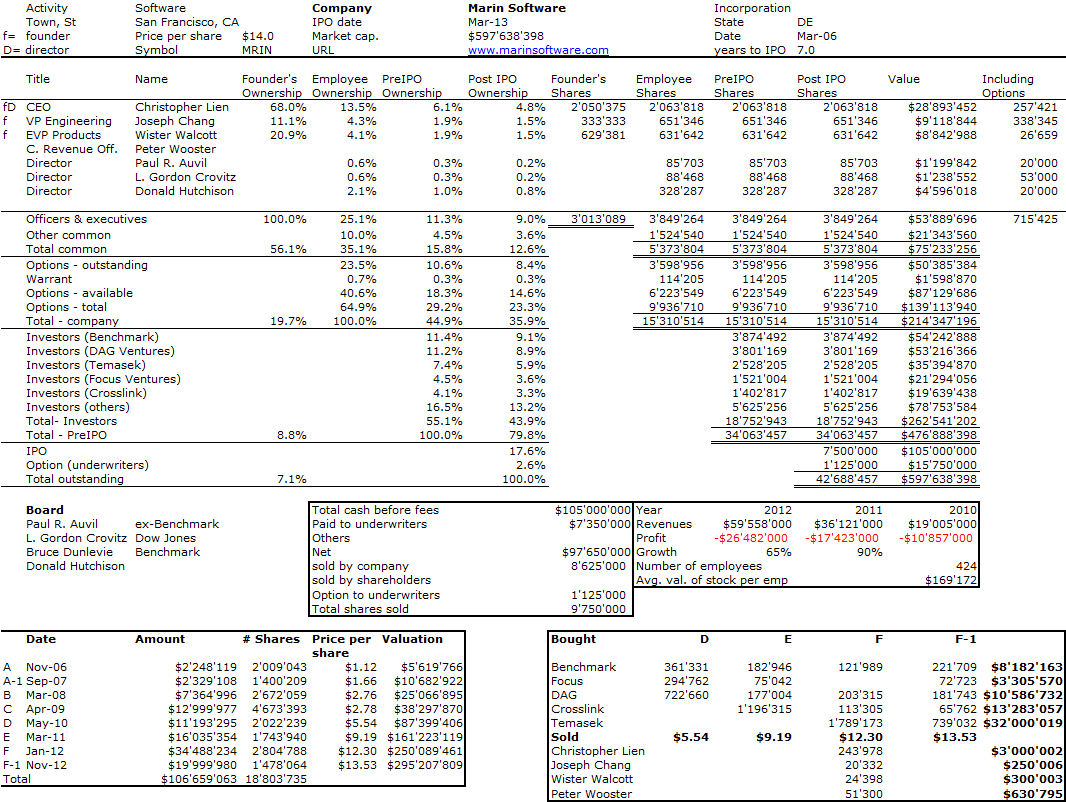 If you have the opportunity to visit VC firm Index Ventures in Geneva, you may see the following: 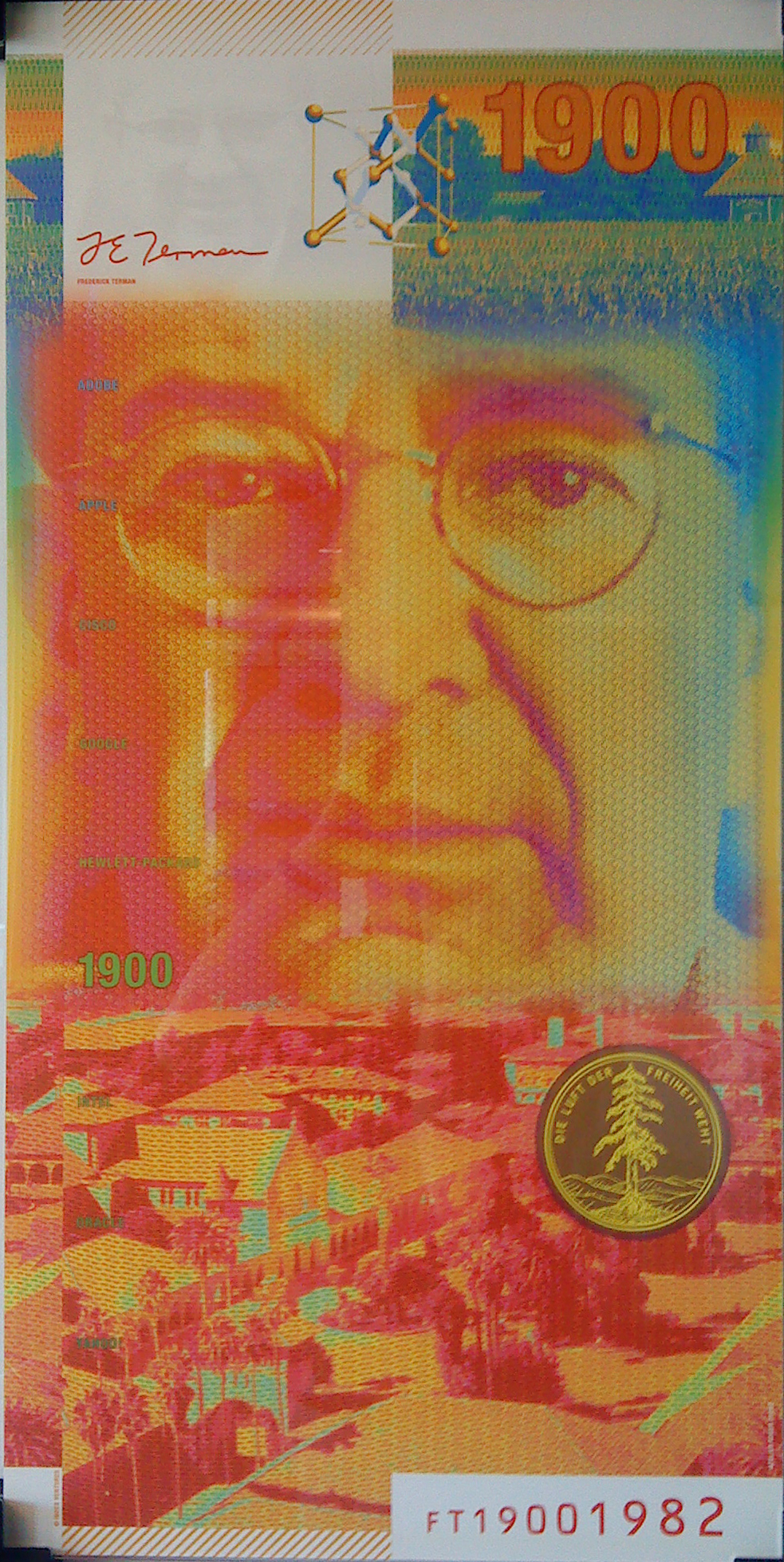 I had a closer look, was allowed to take the picture and learnt that the Index partners have four such “pictures”, one for each meeting room which has the following names: Frederick Terman, Ahmet Ertegün, Ernest Rutherford and Leo Castelli. What do have these very different people in common? In their own activity, they were the best supporters of “creators”, of “talent” and contributed to the success of people they supported. What ever critics may say, great venture capitalists help entrepreneurs in their success.

It was striking for me to discover this the week I published my post on the Black Swan. In particular, I quoted Taleb when he talks about creation: “Intellectual, scientific, and artistic activities belong to the province of Extremistan. I am still looking for a single counter-example, a non-dull activity that belongs to Mediocristan.” and later “You not only see that venture capitalists do better than entrepreneurs, but publishers do better than authors, dealers do better than artists, and science does better than scientists.” (I can add that gold seekers made less money than the people who sold them picks and shovels.) This is not fully true, one should probably add “on average”.

It’s not the first time I see connections made between scientists, entrepreneurs/innovators and artists. I am convinced of the similarities. It was the second time only that I saw a connection made between academic mentors, publishers, art dealers and venture capitalists. Interesting… I think.

PS: if you click and enlarge the picture you my recognize the pictures, read the names of famous start-ups, Adobe, Apple, Cisco, Google, Hewlett-Packard, Intel, Oracle, Yahoo and probably lesser known Stanford University motto “Die Luft der Freiheit weht” I had used as an introduction to Chapter 2 of my book about Stanford start-ups.

Last Friday, I organized “venture ideas @ EPFL” with Jordi Montserrat from venturelab. We had the opportunity to have great entrepreneurs from Minsh, Poken, Basisnote and the 20 winners of the ventureleaders program.

Last but not least, Neil Rimer, founder and general partner of Index Ventures shared his thoughts about Thinking Bigger.

More on the EPFL’s venture ideas page and the past events.