I was motivated a few days ago to look at the work I have been doing for years on public tech. companies, their cap. tables, their overall financial performance. If you do not know what I am talking about, you can have a look at my past analyses on 600, then 700 companies through the tag 600 (former) startups. I’ve now 787 such cap. tables.

It’s been known that there are differences with fields such as biotech. vs. software/internet. About biotech, check Are Biotechnology Startups Different? Regarding software, and more specifically Internet or ecommerce companies, I have not done a similar analysis but I began to notice a while ago that these companies were also money-losing companies at IPO. In the past, you were only going public in IT when you were beginning to be profitable. This was more than 20 years ago! The recent argument for going public while losing money was that these companies would make a profit once they have reached a threshold in size. Amazon was not profitable for many years after its IPO.

But isn’t that argument flawed? Will Uber or AirBnB and similar platform companies ever make a profit? Too early to say and the future is unpredictable. But I thought I would look at the current situation of my 787 companies and have a quick look. So before studying the profit profile of IT companies (this will be in part 2, my next post), here are the basics. There is a total of 435 public companies –  353 companies have been acquired, liquidated (315) and a few are still private (37). My next post should follow soon.

These numbers again show the power law distribution (and not Gaussian) and here is the long list of names for those interested:

A final post (for now) about the data about 600 (former) startups. So what have they become today in April 2020?

First a quick point of caution: I counted some companies twice, because I had looked at their equity strutcure at different points in time: Alibaba had two IPOs in 2007 in HK and 2014 in the USA, Esperion had 2 filings in 2000 and 2013. This is not a big deal, except if you count Alibaba’s value twice!

So out of the about 600 former startups, I found that
– 20 were still private (they may have recently filed for IPOs though)
– 12 were private again after an IPO
– 13 had stopped their activity (often through bankruptcy)
– 225 had been acquired or merged with another company (Merger and acquisitions – M&As)
– 331 were still public.

So let us have a closer look at M&As and public companies: 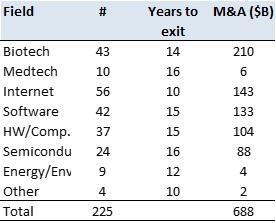 On the M&A side, the main acquisition value comes from biotech, with a $5B average value whereas software or internet is a little les below $3B.

On the public side, I will let you discover depending on your interest about, given the field, the number of companies, employees, cumulative market capitalizations, sales, profits, then age of companies and current average price to sales (PS), price to earnings (PE) and an interesting personal metrics, price ot employees in $M (Pemp).

Sixth post of comments on the 600 startup data. Today, it’s about the valuation of startups.

I had touched the topic on page 615 of the pdf. Here is the data again.

Be aware that these numbers are not typical of traditionnal companies. They show that startups going public are of a speculative nature, with a promise of very high-growth in the future. The multiples are very high and in the case of earnings, in fact most startups do not make a profit at IPO – about one out five! 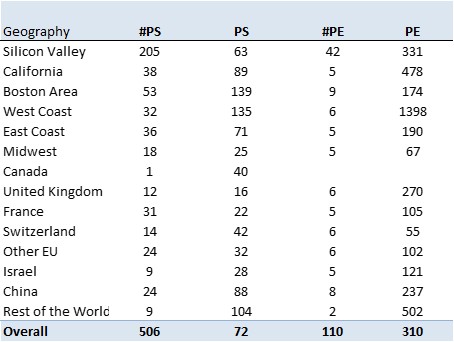 Interestingly Silicon Valley does not have the highest multiples, but Europe is behing the USA. 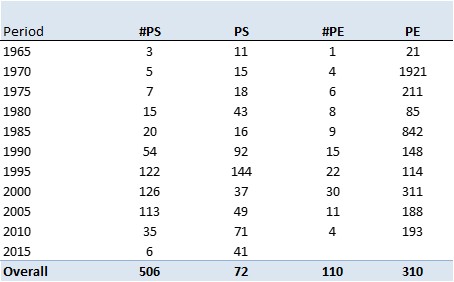 If you are lost, here are slides I have used in the past and if you want to get the excel file, send me an email.