Envivio follows my recent post on another start-up with European roots, Transmode. Envivio has similarities and differences. Both have roots in the Telecom industry, Transmode with Ericsson and Envivio with France Telecom. Both were founded in 2000, 11 years before the IPO or filing.

Both had complex financing rounds, including “down rounds”. You can see that in the Transmode case, the price per share went from $5.5 in the B round to $1 in the C round. These down rounds are usually terrible for founding teams. And indeed, there is not much info about Transmode founders.

Envivio had raised $41M until 2008 and the price per share increased steadily to $2 per share. Difficult to give precise dates for the rounds, but the investors were a combination of corporate investors (France Telecom, Intel, Bertelsman, Philips), and financial (Global Accelerator, Crédit Lyonnais – now Crédit Agricole). Then the G round in 2008 was a down round at $1.25 and the H round, less than 2 years later, even lower at $0.34. With such events, it is not surprising to discover that the investors own 87% of the company before the IPO. Obviously, this would have been very dilutive to the founder, Julien Signes, without the possibility of granting new (stock option) shares that you discover in the right column. 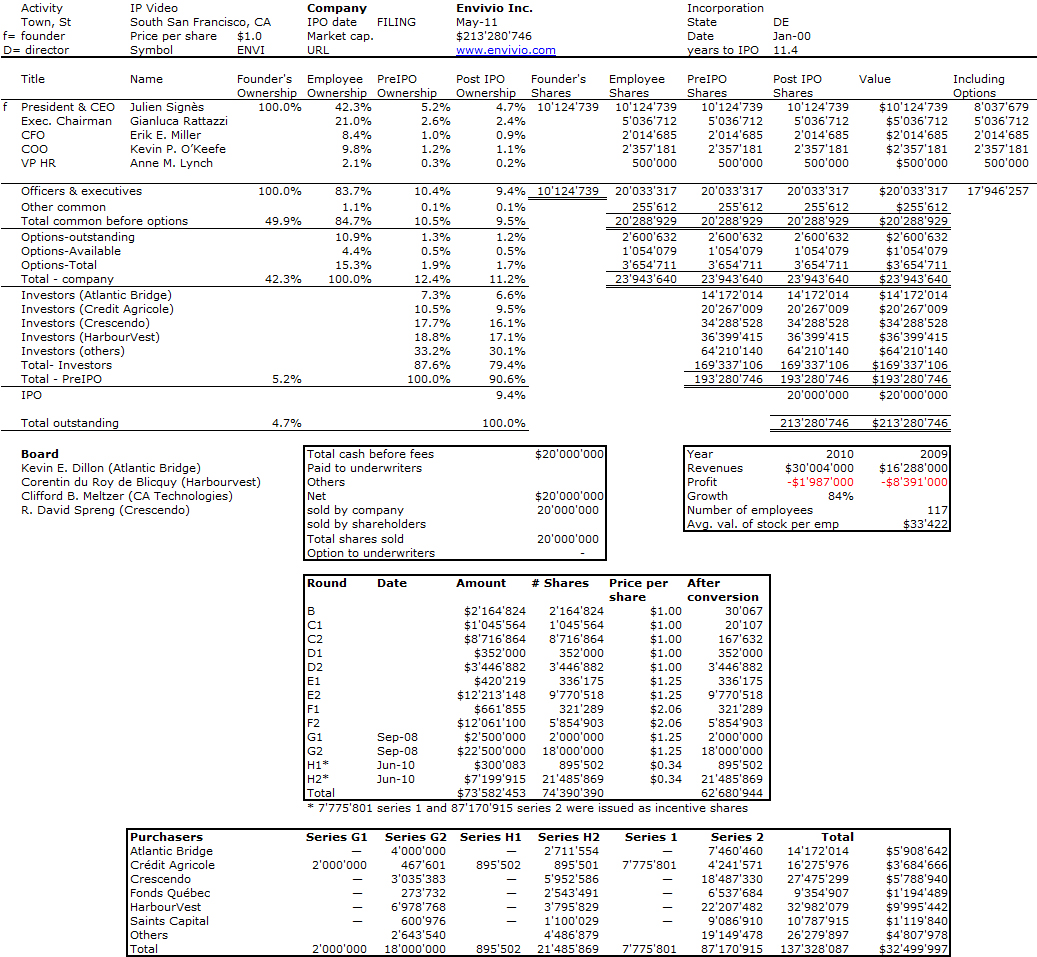 There is another interesting difference with Transmode: Envivio is filing to go public in the USA, it is indeed an American start-up, and not much shows its French roots (the R&D is based in Rennes, Britanny though). Even if Julien Signes studied and worked in France initially, he worked also for France Telecom in San Francisco and I would be curious to know if this had an impact in his entrepreneurial path. I asked him and am waiting for an answer, but it is possible that Envivio is not allowed to communicate in the pre-IPO period.

It is one my thesis that Europeans who had a US experience have digested better the start-up dynamics (whether they moved to the USA and became entrepreneurs there – De Geus, Bechtolsheim, Brin – or they became entrepreneurs in Europe but had lived in the USA – Liautaud, Borel, Haren). This does not prevent European high-tech start-ups to exist and succeed, but I have to admit, the numbers are not exactly the same.

Again, because the company is not public yet, I had to guess what the price per share might be at IPO. I have put a small price, using multiples of market cap. to revenues of 7x. I will make an update when I know more…