Here’s my most recent contribution to Entreprise Romande. Thanks to Pierre Cormon for giving me the opportunity of this opinion column. 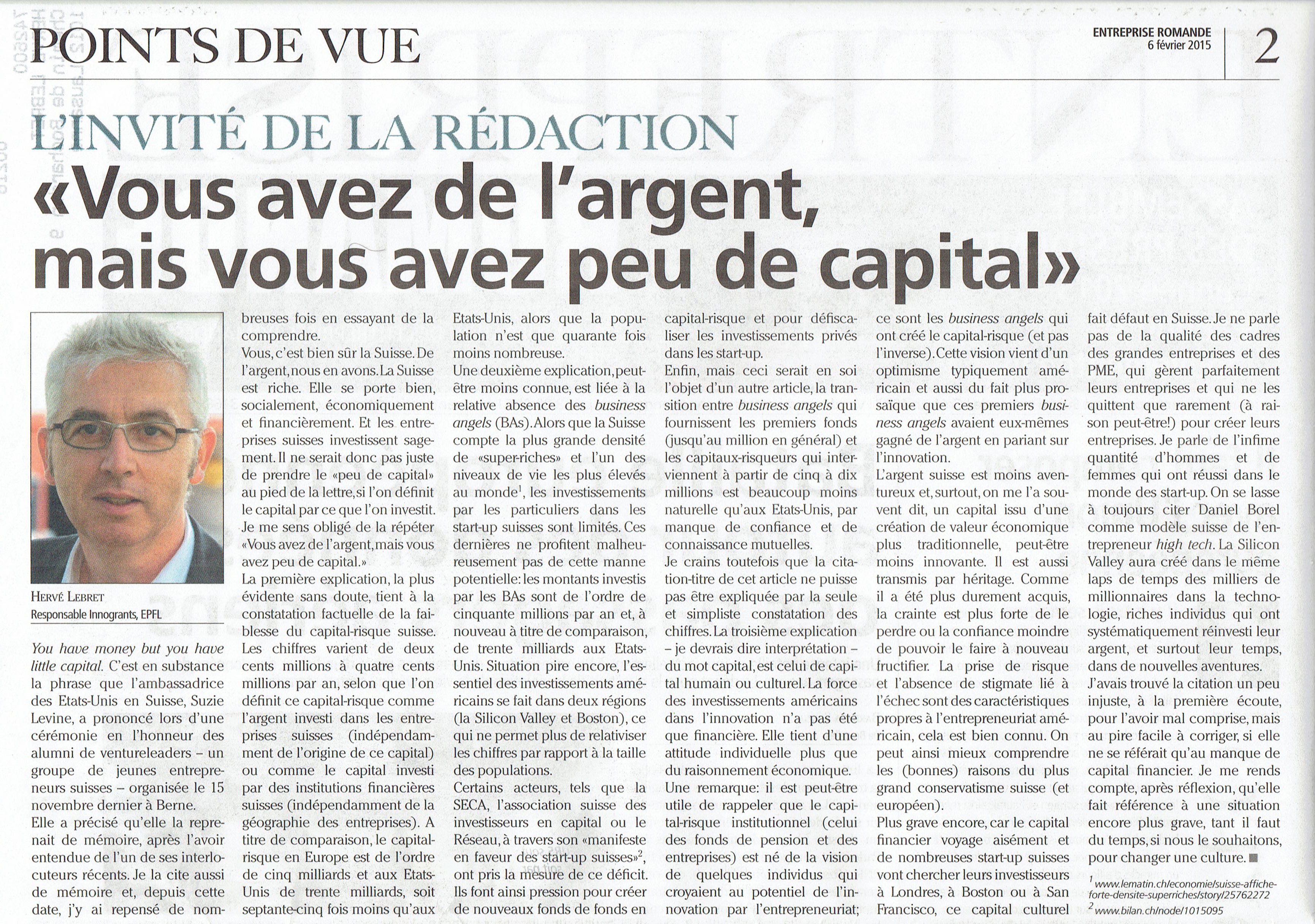 “You have money goal you-have little capital.” This is essentially the phrase that the US ambassador in Switzerland, Ms. Suzie Levine, delivered at a ceremony in honor of the ventureleaders alumni – a group of young Swiss entrepreneurs – last November 15 in Bern. She said she remembered it after hearing it from one of her recent contacts. I also quote her from memory and since then, I thought about it many times, trying to understand it.

“You”, of course, is Switzerland. We have money, for sure. Switzerland is rich. It is doing well socially, economically and financially. And Swiss companies invest wisely. It would not be fair to take “little capital” at face value, if one defines the capital by what is invested. I feel compelled to repeat “You have money, but you have little capital. »

The first explanation, the most obvious probably is due to the factual finding of the weakness of the Swiss venture capital. The figures vary from 200 million to 400 million per year, depending on whether one defines venture capital as the money invested in Swiss companies (regardless of the origin of the capital) or capital invested by Swiss financial institutions (regardless of the geography of the companies). For comparison, venture capital in Europe is of the order of 5 billion and in the US of 30 billion, or 75 times less in Switzerland than in the US, while the population is 40 times smaller.

A second explanation, perhaps less known, is related to the relative lack of “business angels” (BAs). While Switzerland has the highest density of “super-rich” and one of the highest living standards in the world [1], investments by individuals in Swiss start-ups are limited. Swiss startups unfortunately do not benefit from this potential windfall: the amounts invested by BAs are around 50 million per year and 30 billion in the US. And the situation is even worse: most of the US investment is made in two regions (Silicon Valley and Boston), which does not allow anymore to poner the figures in relation to the population size.

Some players such as SECA, the Swiss association of private investors, or the Réseau through its “manifesto for Swiss start-up” [2] are conscious of the deficit. They lobby to create new venture capital funds of funds and favor private investment in start-ups with lower taxation.

Finally, but this in itself would be the subject of another article, the transition from business angels who provide the first funds (up to a million in general) and venture capitalists who are involved from 5 to 10 million is much less natural than in the US because of a lack of trust and mutual understanding.

However, I fear that the citation / title of this article can not be explained solely by the finding of simple numbers. The third explanation, I should say interpretation of the word capital is that of human or cultural capital. The strength of the US investment in innovation was not financial only. It requires individual attitudes more than economic reasonings.

One note: it may be useful to recall that institutional venture capital – funds from pension funds and corporations – was born out of the vision of a few individuals who believed in the potential of innovation in entrepreneurship; it is the business angels who created the venture capital (not the reverse). This vision comes from a typical American optimism and also more prosaically from the fact that these first business angels had made money by betting on innovation.

The Swiss money is less adventurous and above all – this is often said to me – from a capital creation of more traditional and maybe less innovative economic value. It is also transmitted by inheritance. As it is more hard-won, the fear is stronger of losing it and the confidence lower to make it grow again. Risk taking and lack of stigma associated with failure are typical features of American entrepreneurship, this is well known. We can better understand the (good) reasons for this larger Swiss (and European) conservatism.

Worse: because the financial capital travels easily and many Swiss start-up entrepreneurs look for their investors in London, Boston and San Francisco, this cultural capital is lacking in Switzerland. I do not speak of the quality of the executives in the large companies and SMEs, who perfectly manage their businesses and rarely leave them (rightfully maybe!) to create their businesses. I speak of the non-existence of men and women who have succeeded in the world of startups. One could become tired of always refering to Daniel Borel as the “role model” of Swiss high-tech entrepreneur. Silicon Valley has created in the same period thousands of millionaires in technology, wealthy individuals who systematically reinvest their money, and their time most importantly, in new adventures.

I had found the quote a little unfair, when I first heard it, because I had misunderstood it and at worst easy to fix if it referred to a lack of financial capital. I realize it refers to an even more serious situation as it takes time if we want to change a culture.

PS: the following table was not in the article but I had included in my book to explain the “cultural” differences between American and European venture capital.

2 thoughts on ““You have money, but you have little capital””