From time to time, I blog about science and mathematics. Here is a new example. I just discovered a little wonder of popular science, at the same time simple, luminous and demanding. Ideas of geniuses, (Idées de génies) subtitled “33 texts which have shaken up physics”, by Etienne Klein and Gautier Depambour. 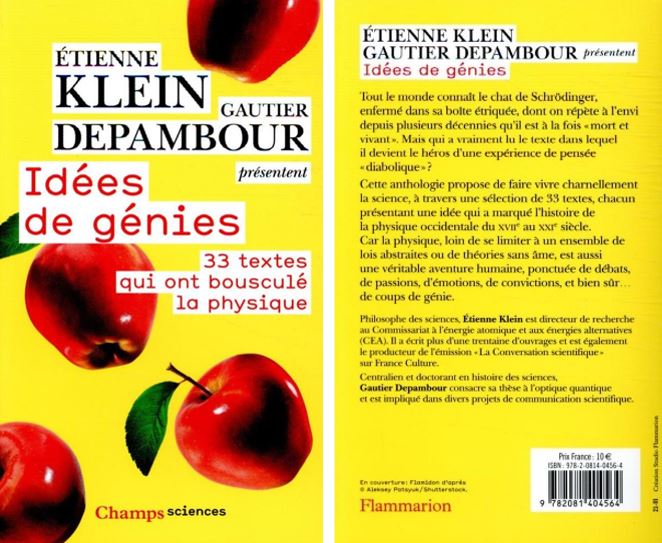 Etienne Klein is also the producer on France Culture of the excellent Scientific Conversation. I had already referred to it in connection with a post about Alexandre Grothendieck and another with Gérard Berry.

Through short texts, the authors make us discover ideas of genius like for example that of Galileo who explains and proves why one or even two kilograms of lead will not fall faster than a kilogram of feathers.

“In free and natural fall, the smaller stone does not weigh on the larger.”
When you place a large stone on a scale, not only will it weigh more if you lay another stone on top of it, but adding a wick of tow will increase its weight by the 6 or 10 ounces that the stone will support; but if you freely leave the stone and the wick attached together from a certain height, do you believe that in the movement the wick will weigh on the stone, so that it should accelerate its movement, or do you believe that the wick will slow down the stone, supporting it in part? We feel a weight weighing on our shoulders when we want to oppose its movement; but if we were falling at the rate that that weight would naturally drop, how do you expect it to lean and weigh on us? Can’t you see that that would be the same as wanting to injure someone with a spear who is running in front of you at a speed equal to or greater than the speed you are chasing? Conclude, therefore, that in free and natural fall the smaller stone does not weigh on the larger, and therefore does not increase its weight as it does at rest.
Galilée, Discorsi e Dimostrazioni matematiche intorno a due scienze attenenti alla mecanica ed i movimenti locali, 1638.

Bright, isn’t it? It also reminds me of Einstein’s inspiration for his theory of relativity although I have yet to read the sections relating to this other genius. All the chapters I have read are of the same style … A must read!