There is no doubt about it, and as the summer begins smoothly, I allow myself an article somewhat less serious than usual, which confirms the thesis of my previous article, The University-based Startup Porsche Principle. Or is it the Tesla Principle?

Innovation is a complex topic but this does not prevent the desire to measure it. The Global Innovation Index with its 83 parameters is the best illustration of this. But cann’t we make it simpler? I propose the simpler Tesla Index which measures the number of Tesla linked to the institution which innovation is to be measured. It shows a certain financial success combined with a curiosity for novelty. We can always bring it back to the size of the entity if necessary … 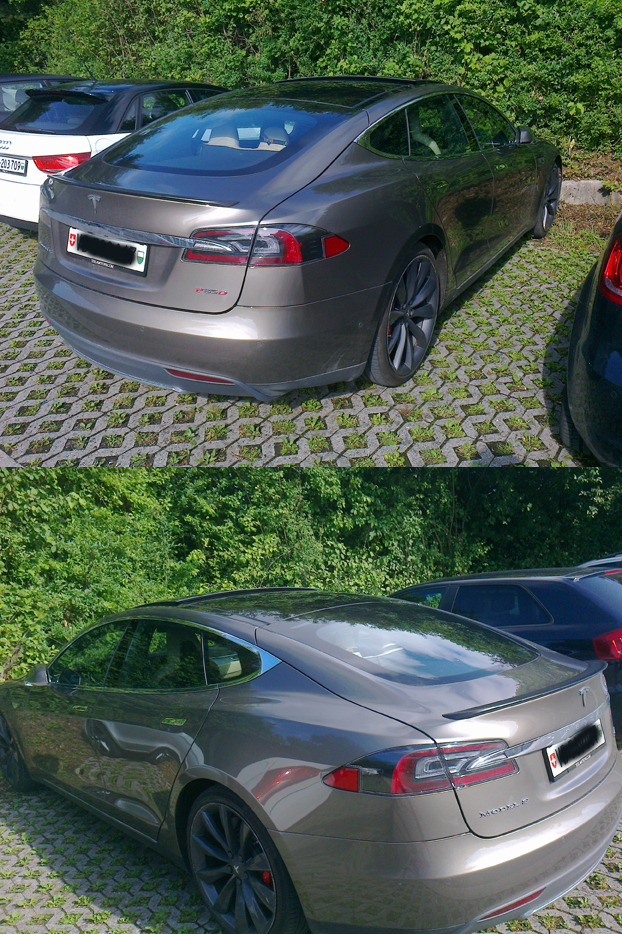 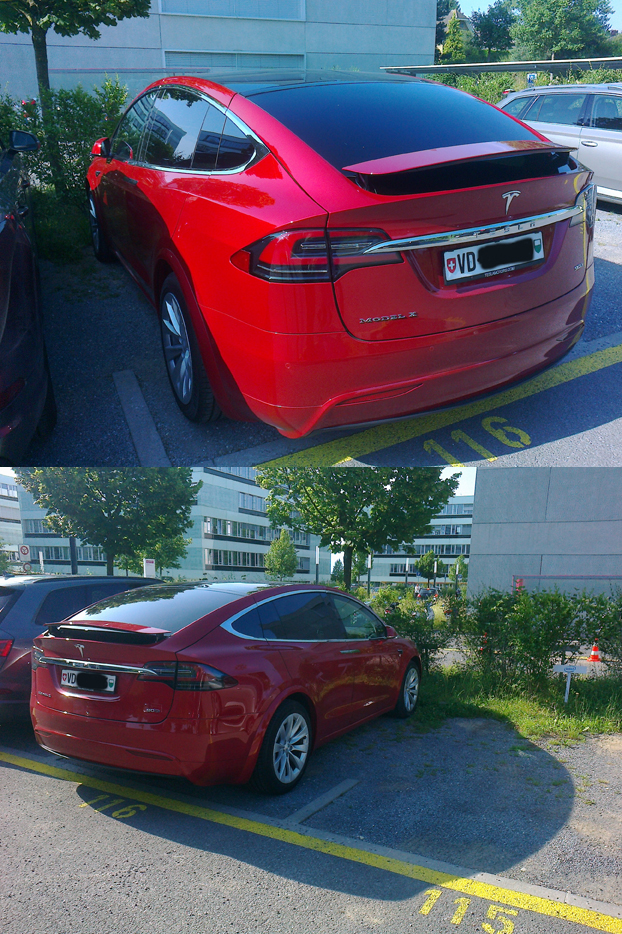 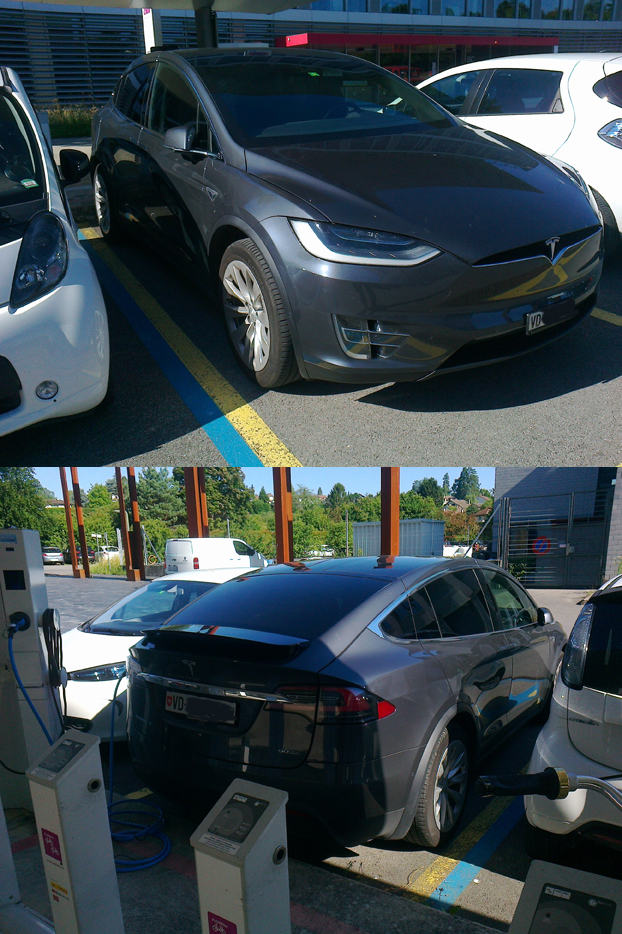 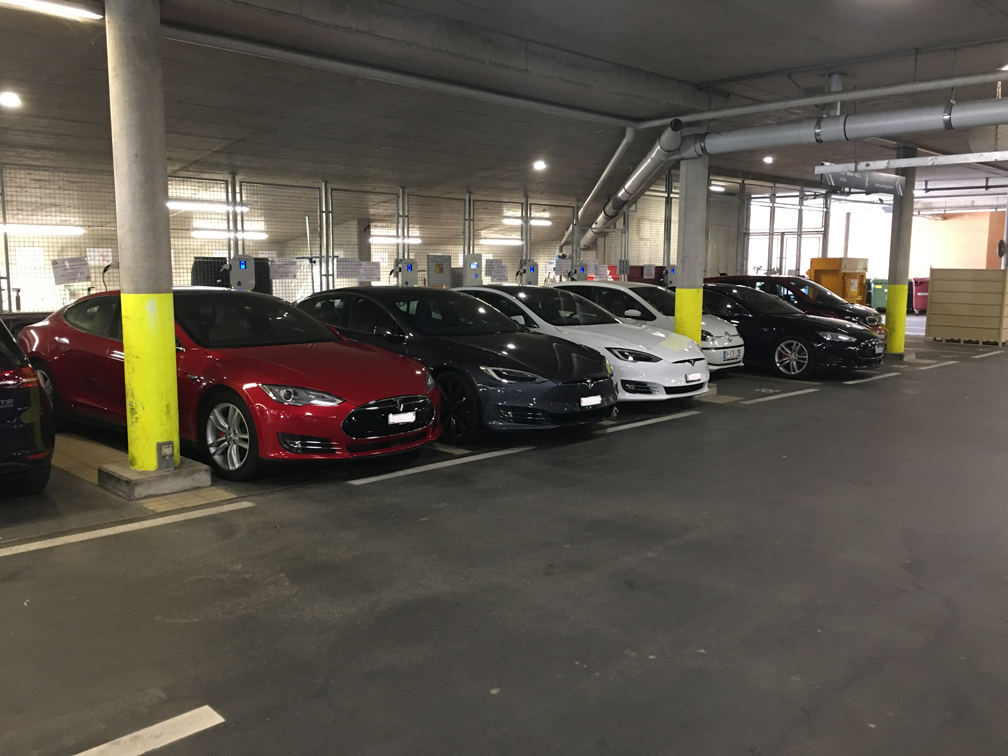 Or should it be called the Tesla Index?

In the book The Rainforest that I am currently reading, the authors write about Role Models that “a common phenomenon of university-based startup companies in the United States is what is sometimes jokingly called the Porsche principle. This principle holds that one of the greatest motivators for professors or graduate students on campus to start new companies is when one of their colleagues drives up in a new Porsche after selling their startup. Confidence is contagious”. [Page 210]

It reminds me a famous quote by Tom Perkins: “The difference is in psychology: everybody in Silicon Valley knows somebody that is doing very well in high-tech small companies, start-ups; so they say to themselves “I am smarter than Joe. If he could make millions, I can make a billion”. So they do and they think they will succeed and by thinking they can succeed, they have a good shot at succeeding. That psychology does not exist so much elsewhere.”

I’ve seen it in Europe too, but to be honest, today, at EPFL and probably elsewhere, I would call it the Tesla principle… or Tesla Index. I biked quickly on campus today and here is what I found, although I know of at least 4-5 Teslas close-by… Could this become the equivalent for Innovation to the Impact Factor in Research?!!!Don’t take all this too seriously. Launching a start-up is not motivated by money. It is mostly about passion…

Regularly but not often enough I read about people calling Europe to wake up and react. Recently it was Nicolas Colin’s What makes an entrepreneurial ecosystem. But now I also remember Risto Siilasmaa’s Entrepreneurship should be cherished” and I had my own Europe, Wake Up!. The latest of these is Marcel Salathé’s Creating a European Culture of Innovation. Another must read. Thanks Marcel! So let me just quote him. 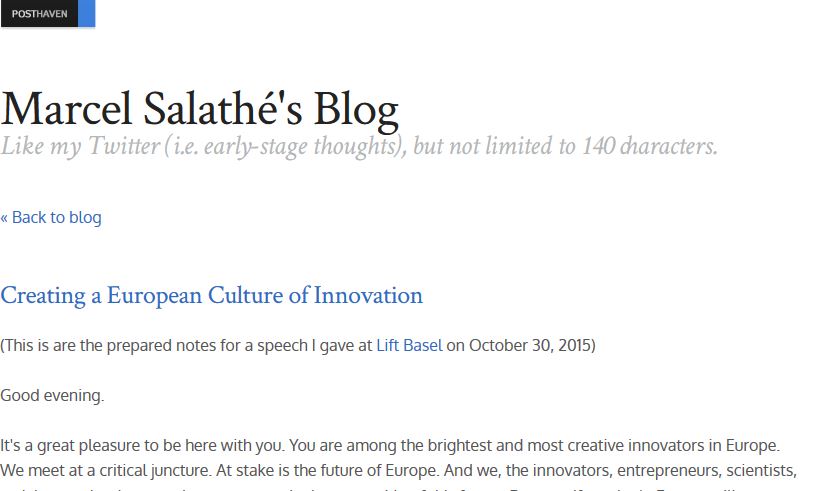 At stake is the future of Europe. And we, the innovators, entrepreneurs, scientists, activists, and artists, need to step up and take ownership of this future. Because if we don’t, Europe will continue its downward trajectory that it’s currently on, and become what it many places it already has transformed into – a museum of history.
[…]
The information and communication technology sector is now the dominant economic driver of growth. Think Apple, Google, Facebook, Amazon, Uber. Noticed something? Not a single European company. Only 1 out of 4 dollars in this sector are made by European companies, and all the indicators for the future are pointing down. Some numbers are even more dire: when you list the top 20 global leaders of internet companies that are public, you know how many are European? Zero. And among all publicly listed companies in the digital economy, 83% are American, and a mere 2% are European. 2%!
[…]
So where’s the problem? Some say it’s VC funding, which is only partially true. Yes, the culture of VC funding is probably less mature in Europe than it is in the US, especially for stage A, B and C funding. But money will find its way into good ideas and market opportunities one way or another. Others say it’s simply the European market, and European regulation. I think that is an illusion. Look at AirBnB, the US startup that now has a valuation of over 25 Billion dollars. It was started as a three person startup in California’s Y Combinator, but it now gets over half(!) of its revenues from within Europe. And by the way, San Francisco is probably one of the worst regulatory environments you can find yourself in. AirBnB is currently facing huge battles in San Francisco, and a Californian judge recently ruled Uber drivers employees, causing a minor earthquake in the booming sharing economy. Indeed, California is probably one of the most regulated of the American States, and yet it does exceedingly well.
I think that the problem is actually quite simple. But it’s harder to fix. It’s simply us. We, the people. We, the entrepreneurs. We, the consumers. I have lived in the San Francisco Bay area for more than three years. What’s remarkable about the area is not its laws, or its regulations, or its market, or its infrastructure. What’s truly remarkable is that almost everyone is building a company in one way or another. Almost everyone wants to be an entrepreneur, or supports them. Almost everyone is busy building the future. Indeed, you can almost physically feel that the environment demands it from you. When someone asks you about what it is you are doing professionally, and you don’t respond by saying that you’re building a company, they look at you funny, as if to say, “then what the hell are you doing here”?
[…]
It’s not a trivial point I think. The other day, I was in Turin in Italy, and I desperately needed a coffee. I walked into the next random coffeeshop, where I was served a heavenly cappuccino, with a chocolate croissant that still makes my mouth wet when I just think about it. Was I just lucky? No – all the coffee shops there are that good. Because the environment demands it. Sure, you can open a low-quality coffee shop in Turin if you want to, but you’ll probably have to file for bankruptcy before you have the time to say buongiorno. The environment will simply not accept bad quality. In another domain, I had the same personal experience when I was a postdoc at Stanford. Looking back, all of my best and most cited papers I wrote there. I don’t think it’s coincidence. Every morning, as I was walking across campus to my office, I could sense the environment demanding that I do the most innovative work – if I didn’t, then what the hell was I doing there?
So this is my message to you. I’m asking you to create those environments, both by doing the best and most innovative you can, but also by demanding the same from everyone else around you. These two things go together; they create a virtuous circle.
[…]
Don’t ask for permission, ask for forgiveness if necessary. If you are waiting for permission, you will wait for the rest of your life. Most rules exist for a simple reason: to protect incumbents. Don’t ask for permission, just go and do it.
[…]
Orson Welles was best at describing why asking for permission is deadly…

[…]
So please, let us all live in the future and build what’s missing – here in Europe. I am worried sick that the easiest way for me to live in the future is to buy a ticket to San Francisco. Just like the easiest way for Americans to relive the past is to buy a ticket to Europe, rich in history. I’m asking you to become even more ambitious, more daring, and more demanding, both of yourself, but most importantly also of your environment.

Salathe talks also about role models. His was the founder of Day Interactive, a Swiss start-up which went public in 2000 before being acquired by Adobe for $250M in 2010. So coming next… its cap. table.. 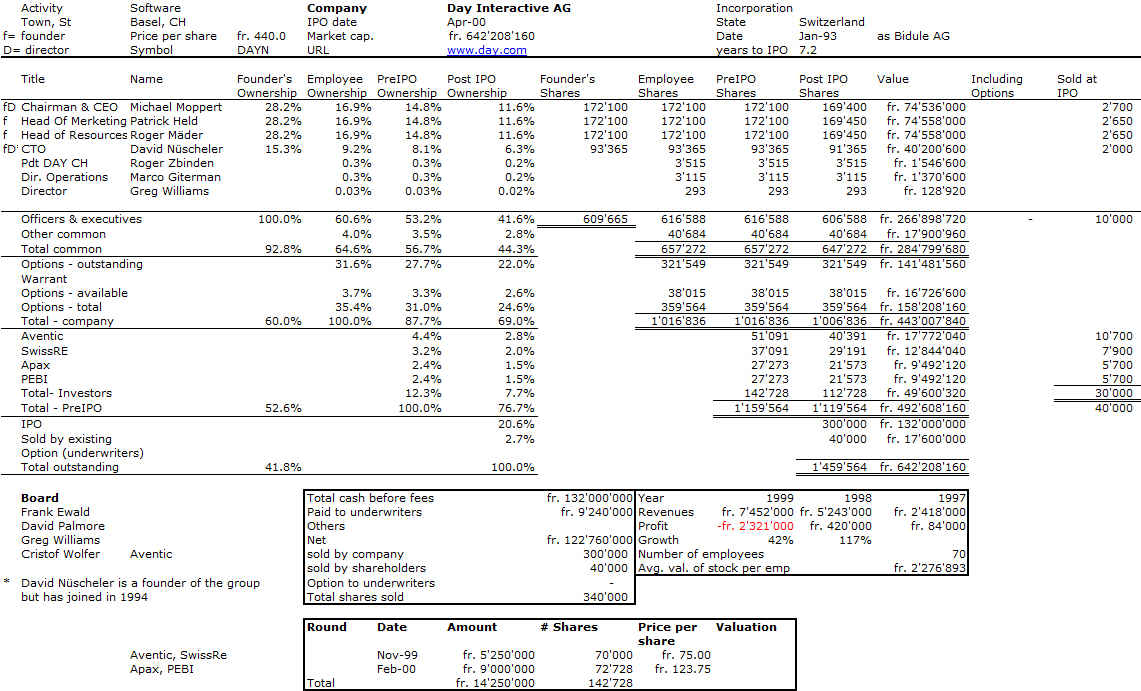 I usually do not mention my activity at EPFL in this blog, but here is an exception. This week, I organized with venturelab the 10th edition of ventureideas, a conference where we invite entrepreneurs to share their experience. All the venture ideas @ EPFL can be found with the link on the name.

This week we had Rich Riley, Senior VP, Yahoo and Paul Sevinç, founder of Doodle and their talks can be viewed below. I am very proud of these events and of all the guests we had in the past. Let me just give you a few names:
– Pierre Chappaz, founder of Kelkoo
– Eric Favre, inventor of Nespresso
– Aart de Geus, founder and CEO of Synopsys
– Daniel Rosselat, founder of Paleo
– Marc Burki, founder of Swissquote
– Neil Rimer, GP of Index Ventures…