I must admit I did not know Bill Janeway. I should have, given his long expertise in venture capital. His recent contribution was mentioned by many including Nicolas Colin and on a personal note, friends from IMF. They just mentioned to me 8 videos which seem absolutely brilliant: Venture Capital in the 21st Century.

I just watched the third: Evaluating Venture Capital Performance | #3 | Innovation in the 21st Century. Here are the slides.

Janeway reviews the performance of Venture Capital firms and recent changes in the venture capital market. He starts by summarizing the stylized facts of venture capital returns (highly skewed, very persistent, and correlated with the stock market). VC capital increased rapidly in the late 1990s, peaking in 2000. VC returns have since settled down, with longer holdings and fewer IPOs. But with the climate of zero real interest rates since 2008, new unconventional investors (private equity, hedge funds, etc.) have waded into venture financing directly, hunting for the high returns of the next big tech giant. A “Unicorn Bubble” has developed as a result, where dubious firms have been financing their growth by selling illiquid securities at inflated prices to deep-pocketed investors with little expertise or control over the entrepreneur. This may have implications on the long-term link between venture financing and technological innovation.

I just copied a few screenshots:

Venture capital returns are highly correlated to those of Nasdaq as shown above and below, so… ? 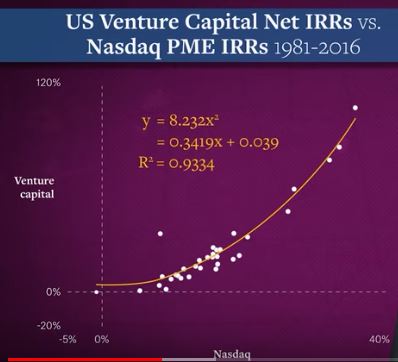 Good VCs are good and bad VCs are bad.