America loves its heroes! Two recent events seem to show that after Hollywood’s Walk of Fame and the Hall of Fames in sport, high-tech entrepreneurship is creating its own star system:

– it began with Boston’s Kendall Square. See for example the Xconomy article: Entrepreneur Walk of Fame Opens in Kendall Square: Gates, Jobs, Kapor, Hewlett, Packard, Swanson, and Edison are Inaugural Inductees.
– it was followed by Stanford recent Engineering Heroes project. This one is a project only with a very long list of more than 60 nominees. 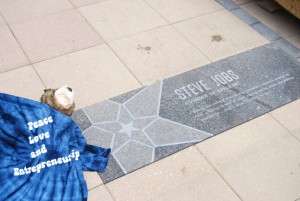 Well you could build your own list. I think Boston missed Robert Noyce. Stanford will have to decide on its initial winners. The value of such lists is obviously the role model effect it should induce.