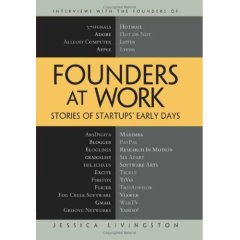 As I say, for people, it depends on their situation if they can take that risk of joining a startup or moving to a new city if they don’t live in the right place. For me, I was actually single at the time, I didn’t have a mortgage, so the idea of joining a little startup that may well be destroyed was just like, “That will be fun.” Because I kind of thought, “Even if Google doesn’t make it, it will be educational and I’ll learn something.” Honestly, I was pretty sure AltaVista was going to destroy Google.

I was curious to see what’s the attitude of a typical startup in Scotland compared to here. I found that they are just culturally a whole lot more conservative and cautious. And somewhat lacking in self-confidence. You come over here and . . . I had a meeting recently with a couple of early 20-year-olds who have decided to drop out of Stanford because they got bored, and they are trying to raise money to fund their startup. They believe they can do it, and nothing’s going to hold them back. They have confidence, they have that spirit, which I think is great and is probably unique to this part of the world. Being part of that for so long, for me, has been very invigorating.